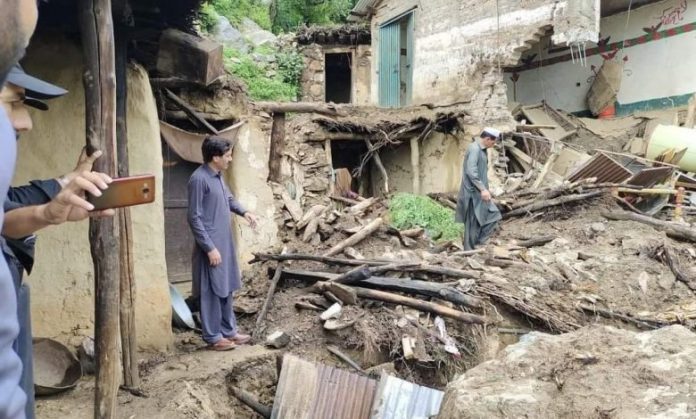 Widespread rains have played havoc across the province and killed at least 10 people and injured 13 others over past 24 hours in different parts of the Khyber Pakhtunkhwa.

Provincial Disaster Management Authority (PDMA) said that at least 300 houses were damaged in the torrential rains.

PDMA said that River Jindi in Charsadda and River Kabul in Nowshera were in high flood while the flow of the rivers in the rest of the areas was normal.

PDMA said that four children and an adult were killed in rain related incidents in Mardan, two in Swabi, one each in Bajaur, Mohmand, Swat and Manshera districts.

On the other hand, rising river level has caused panic local population I in the Charsadda district while on the other hand monsoon rains also led to flooding in many parts of the province.

Besides, there were also reports of damages livestock.

Locals trapped in the flooded area told TNN that the surging rivers have entered their homes and fields, while district administration has failed to assist them.

On the other hand, district administration said that they were assessing the damages in those areas.

Malik Awal Khan, a resident of Gohar Abad area of Charsadda district said that the River Jindi was in high floods, forcing them to relocate their children and livestock to safer places.

He said that women and children were panicking due to the rising river level.

Mr Khan said that women and children were under open sky while men of the household were stationed at the riverbank, anxiously looking over the rising water.

However, he said that so far no responsible officer of district administration has extended any help to the affected families. He said that the flooding Jindi River has also destroyed crops over thousands of acres of land, causing damages worth millions of rupees to the farmers.

Yousaf Shah, a local farmer told TNN that the district government has setup flood protection bunds; however, some avaricious locals dug them up and sold off. However, he said that now entire area was paying the price for their greed.

He said that he had spent Rs 100,000 on planting crops and thousands others on payments to the laborers; however, floods destroyed everything.

Mr Shah said that more rains were likely to cause more damages.

A spokesperson for the DC Charsadda said that they were assessing the damages and sending help wherever it was needed.

He said that there was no threat of major flood in three rivers of Charsadda district.

However, he said that Sardryab and Khiyali were in low level flood while Jindi was facing mid level flood.

He said that rains in upper parts of province might cause more flooding in the district.