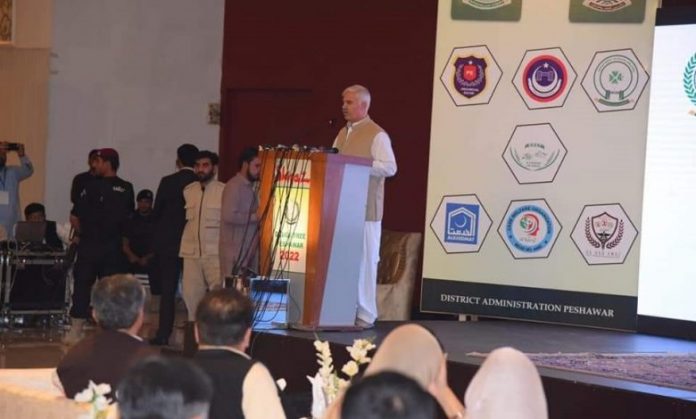 Around 1200 drug addicts were discharged after three months long rehabilitation and handed over to their families.

Khyber Pakhtunkhwa Chief Minister Mahmood Khan was chief guest at this occasion while senior government officials and other notables also attended the meeting.

In the ceremony, 1200 rehabilitated drug addicts under drugs free Peshawar drive were handed over to their families. Drugs Free Peshawar had been launched on directives of Chief Mr Khan and about 1200 drug addicts were picked up from different spots of Peshawar and admitted to the different rehabilitation centers.

The whole process including detoxification, disease screening, psycho therapies, counseling and treatment had been completed successfully.

Under the next phase of the drug free Peshawar drive, these rehabilitated people would be imparted with technical and professional skills for which special courses have been designed. Besides, 380 jobs opportunities have also been created for rehabilitated people with the cooperation of business community of Peshawar. The second phase of campaign would be launched by the first of September this year under which left over drug addicts in Peshawar would be rehabilitated.

The chief minister while felicitating the commissioner Peshawar, his entire team, welfare organizations and all other stakeholders on successful completion of the first phase of the drive has said that it was really a good deed and Allah the Almighty will give reward to those who have extended their support to this effect.

The chief minister said that the drugs were a menace; it was on collective responsibility to eliminate this menace from the society by playing our due role. He termed the role of parents in this regard as of a vital importance and said that the parents should pay special attention to their children and keep a vigilant eye on their unhealthy activities. Underlining the need to eliminate the supply of drugs, the chief minister said that the provincial government with the cooperation of Police, administration, federal and provincial relevant entities would take curative steps for the purpose.

He also announced to extend this campaign to the other districts of the province and directed all the divisional and district administrations to launch this drive in their respective divisions and districts.

Earlier, the Commissioner Peshawar division Riaz Khan Mehsud also addressed the ceremony and highlighted the various aspects of the drive and reiterated his commitment that the divisional administration will go all out to make the Peshawar drug free in line with the directives of Chief Minister Mahmood Khan.