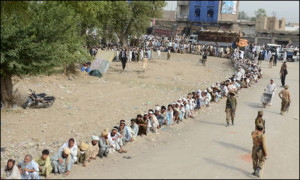 PESHAWAR, July 16: The Provincial Disaster Management Authority (PDMA) has said more than 24,000 families displaced from North Waziristan have been registered so far and 8000 of them have been given mobile phone SIMs for provision of financial assistance as well.

He added that the government has opened 40 branches of the bank in Peshawar, DI Khan and Lakki Marwat districts to distribute 2 billion rupees to the affectees of the military operation before 27 July.