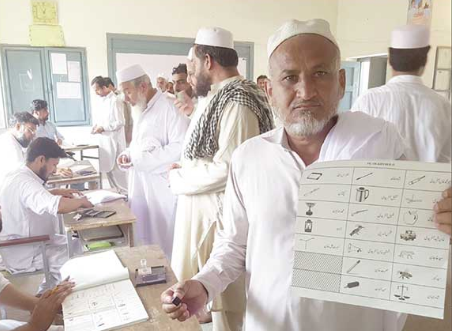 PESHAWAR: Nearly 27.6 percent of the registered voters in seven districts and Frontier Regions (FRs) of erstwhile Fata went to the first-ever elections to the Khyber Pakhtunkhwa Assembly seats, marking the completion of their constitutional merger with the province a year after the passage of the 25th Constitutional Amendment.

The historical elections in areas that were embroiled in conflict for almost two decades remained peaceful and free from any major controversy over the quality of the electoral process. However, these elections did not yield a turnout that was expected, which remained lower by 6.3 percent in comparison to the turnout for the National Assembly seats on July 25 last year, Free and Fair Election Network (FAFEN) reported. The low turnout was partly due to warm weather that discouraged people from going out of their homes in the afternoon in some constituencies.

A gender desegregation of turnout suggests almost 20 percent of women voters turned out to vote in Saturday’s elections as compared to 23.8 percent in general elections. Similarly, around 33 percent of men voters voted in Saturday’s elections as compared to 40.3 percent on July 25, 2018. These turnout figures are, however, based on information received from 14 constituencies. FAFEN did not receive any report on bar on women’s voting, though there may be further elaborations on this matter in the detailed report based on the observation of more than 1,600 polling stations and their result forms.

The election followed a competitive election campaign with almost all major political parties vying for majority of the 16 general seats. Supervised directly by the Election Commission of Pakistan (ECP) officials as district returning officers (DROs) and returning officers (ROs), the crucial election processes before and on election day was largely managed in accordance with the provisions of the Elections Act, 2017 with nearly complete access to all critical electoral processes to independent observers.

Amid apparently misplaced security fears, the overall environment on election day remained peaceful with three incidents of violence in Khyber, Mohmand and Kurram tribal districts leading to interruptions to the voting process. In PK-105 Khyber-I and PK-109 Kurram-I, clashes were reported between workers of rival candidates. Two persons were reportedly injured due to an incident of firing outside a polling station in PK-103 Mohmand-I.

Interruption in the voting process was reported at some polling stations due to inadequately trained staff and shortage of election material. The ECP oversaw the management of this election by deploying 13,223 trained personnel to perform election duties in 16 constituencies at 1,896 polling stations with 5,651 polling booths. In order to pre-empt any untoward incident on election day, the ECP had positioned a three-tier security system deploying over 34,000 personnel of armed forces alongside police and other law enforcement agencies inside and outside polling stations.

As many as 297 candidates including two women contested the elections on general seats, of which 213 were independents and the remaining 84 belonged to 10 political parties. The ECP had set-up 1,896 polling stations for 2,798,277 registered voters, averaging one polling station for 1,476 voters. A total of 44 polling stations were set up in Hangu and Kohat for the temporarily displaced voters from PK-110 Orakzai, and 14 in Bannu for TDPs from PK-112 North Waziristan-II.