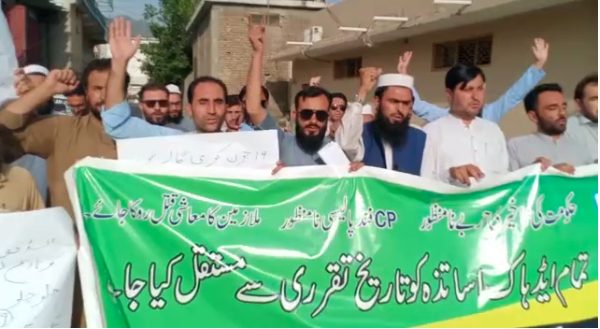 Adhoc young teachers of Lower Dir district have announced to stage a sit-in in front of Bani Gala residence of Pakistan Tehrik Insaf Chairman Imran Khan on June 19 in protest against employing delaying tactics in their regularizations.

In this regard, Adhoc Young Teachers Association Lower Dir staged a protest in front of Timergarah Press Club. A large number of teachers took part in the demonstration. The protesters were carrying banners and placards inscribed with slogans and their demands.

They said that despite the government decision to regularize the teachers, chief secretary KP returned the summary with objections to the education department. They said that this decision has sent shock waves among the teachers community.

The speakers at this occasion also announced to reject the contributory pension fund scheme announced by the KP government. Besides, they also rejected the proposal to regularize the employees from the date of regularization instead of date of appointment in phased manner. The protesters demanded that the adhoc teachers should be regularized from their date of appointment. Otherwise, they said that they will stage a sit-in at the Bani Gala on June 19, which will continue till acceptance of their demands.