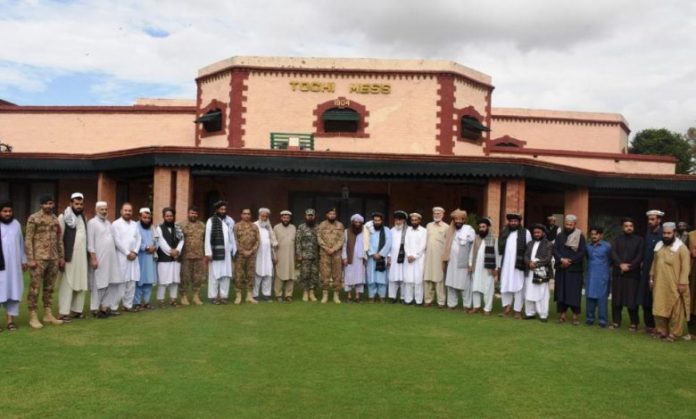 During the talks, both sides discussed boosting bilateral trade, border affairs and other important matters. Pakistani officials briefed the Afghan delegation about the steps taken by them regarding border related issues, facilities for Afghan patients visiting Pakistan for treatment, boosting trade between both countries and steps taken to facilitate Afghan transporters.

During the talks, Pakistani side also informed their Afghan counterparts about their reservations and asked the other side to give passport to Afghan national, travelling on tazkira to Pakistan for treatment.

They said that several Afghan patients, who had entered Pakistan for treatment, have not returned thus far. Besides, they said that Afghan drivers crossing the borders should also proper visas.

At this occasion, Afghan delegation assured their Pakistani counterparts about addressing their concerns and said that patients travelling for treatment will be verified and the patients will carry letters from Taliban side.

At this occasion, Afghan delegation praised the Pakistani authorities for steps taken to boost bilateral trade and facilitation of transporters. In addition to this, Pak-Afghan Joint Chamber of Commerce representatives and traders first held talks in Afghanistan and later in Pakistan.

Earlier officials and traders from both sides had agreed to cooperate to remove hurdles in the way of trade during Pakistani delegation three days visit to Afghanistan from July 18-20.

Both the sides during the talks agreed to increase the volume of trade between the countries during the ongoing year.

He said that they were also working to introduce documentation system for traders, which will not only facilitate the businessmen but also boost the trade volume between both countries.

During the talks, both the sides agreed to make the operations of border crossing more effective in order to boost trade and ensure early clearance of transit trade vehicles. In addition to this, both countries also agreed to allow transport vehicles from the other country on the temporary admission documents (TADs), which will enable the vehicles of free transportation on both sides of the border.

Besides, both countries also agreed to stop unloading and loading of trade goods at the borders.

Both delegations also agreed to increase the operational timing of border crossing opening at Torkham, Kharlachi, Ghulam Khan and Chaman.

Pak-Afghan Joint Chambers of Commerce Chairman Khan Jan Alkozi at this occasion told media that both the countries should adopt modern techniques for trade. “We want to do business with Pakistan in dollars and we need to have an alternate way if it is no longer feasible in future,” he said.

Bilateral Trade between Afghanistan and Pakistan

On the other hand, trade between both countries has surged during the current year and this momentum needs to be maintained for the benefit of both countries.

Ziaul Haq Sarhadi, vice president of Pak-Afghan Joint Chamber of Commerce said that Afghan delegation has met all the major traders of the KP in order to boost business ties.

Mr Sarhadi said that the both the countries discussed round the clock operations of border as well as easing visa regime, which was very crucial for trade ties.

Volume of trade stood at US$ 1.55 billion during the2021-22 with the balance of trade of favoring Afghanistan.

During this period, Afghanistan exported goods worth US$ 834 million to Pakistan as compared to US$ 750 million imports from Pakistan.