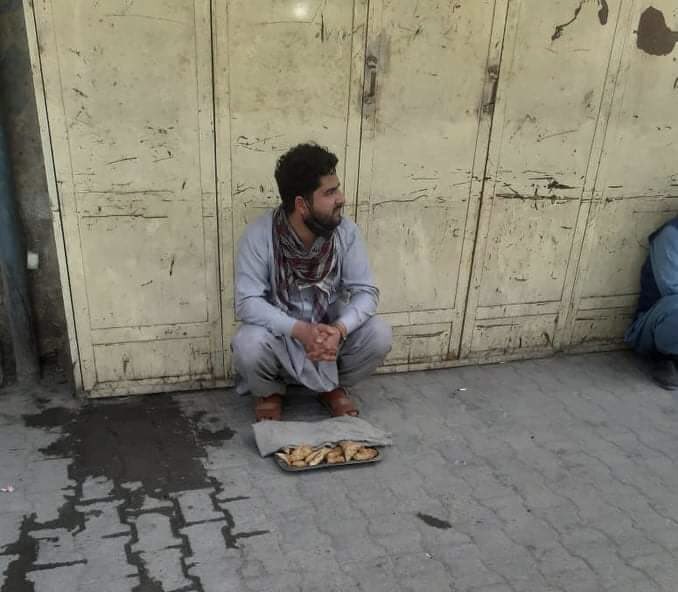 Musa Muhammadi, a former Afghan TV anchor has been forced to sell street food to take care of his ailing mother, after falling on hard time in the aftermath of the fall of Kabul to Taliban.

Two of Mr Muhammadi’s juxtaposed picture, one of which shows him in TV studio while the other sitting in a Kabul street with a tray of food in front of him in shabby attire, were widely shared on social media.

Kabir Haqmal, former spokesperson of the defunct Afghan National Security Council tweeted a picture of Mr Muhammadi in Kabul’s street with a caption journalist’s life in Afghanistan under the Taliban.

“Musa Mohammadi worked for years as anchor and reporter in different TV channels, now has no income to feed his family and sells street food to earn some money. Afghans suffer unprecedented poverty after the fall of republic,” he noted.

M Ibrahim Mohmand, another Afghan journalist and Mr Muhammadi colleague also tweeted about him. “My ex-colleague in Salam Watandar Radio Musa Mohammadi who has lost his job in media is now reportedly seen selling food on the streets of Kabul to take care of his ill mother.”

On the other hand, Izharullah, a Peshawar reporter with Independent Urdu said that Mr Muhammadi had received a job offer from state-run Radio Television Afghanistan.

Afghanistan once bourgeoning media has fallen on hard times after the Taliban overthrow of the Afghan republic earlier in August last year following the US withdrawal.

A large number of journalists have left the country for safer shores while media organizations are facing increasing scrutiny from Taliban regime.