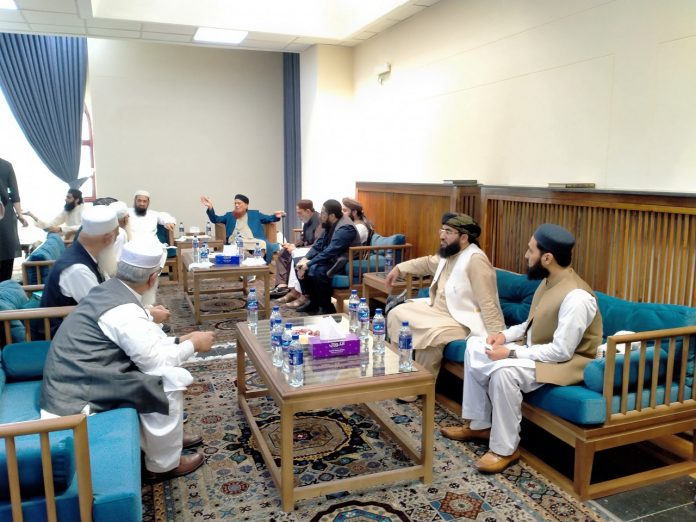 Afghan Taliban have assured a delegation of Pakistani religious scholars which recently visited Kabul that they will soon reopen girl’s schools and colleges in the war torn country.

Both sides discussed trade, business, bilateral relations and women education in the talks.

A delegation member requesting anonymity said that Afghan Taliban delegation assured the delegation that they will soon reopen girls schools and colleges across the country where they will study within the bounds of Sharia law.

Another member of delegation said that they gave the example of Pakistani girls who were studying as well working in various sectors including health and education to the Taliban.

He said that the delegation advised the Taliban to allow girls to attend their schools and colleges. “We told them that Taliban government could even make separate arrangements for education of boys and girls in good environment,” he said.

Similarly a large number of women were also successful into getting secondary and college education. On the other hand, women literacy which was currently less than 50 per cent has also increased considerably.

The report said that till 2018, a total of 3.6 million girls were enrolled into educational institutions, including 2.5 million in primary schools and over a million into secondary schools.

UN report said that enrollment of girls in secondary education was remarkable which jumped to 40 percent in 2018 from six percent in 2003.

On the other hand, there are more than 49 colleges and universities across Afghanistan and many of them encouraged women to study before the Taliban takeover of Kabul.

Kabul University was also among those institutions from which Taliban had shut down between 1996 and 2001. The varsity reopened later in 2002 after the overthrow of Taliban.

More than 24,000 students were enrolled in the Kabul University before the Taliban took over government after the withdrawal of US troops earlier in 2021.

Wasa Khalili, a Peshawar based Afghan refugee said that education improved and changed people lives; therefore, no wanted to be left behind in education.

She said that it has been more than a year that Afghan girls were denied their right to education. “In the first rule of Taliban, women were deprived of education, which affected an entire generation of Afghans,” Ms Khalili said.

On the other hand, number of private schools has also increased many fold over past two decades. Many of these schools were girls’ schools.

The UN report said that there were 803 private schools were operating in the country by 2020 with more than 170,000 enrollments and 44 percent of them were girls.

About 420 of these private schools were in Kabul while 123 others were in Heart.

Taliban have also shut down these schools.

However, these figures may not depict true picture of the situation as despite the gains made in big cities like Kabul, Heart and Jalalabad, most of the country’s rural hinterland did not witness any major change.

In addition to this, the future of women still appears bleak despite two decades long government efforts and huge international aid.

Shaoor Atal, an Afghan said that women comprised nearly half of Afghan population and if they were deprived of their right to education, then will not able to contribute to the development of their nation.

Many of Afghans are also of the view, a large number of those currently staying in Pakistan were also likely to return to their country once Taliban lift the ban on the girls education in the country.