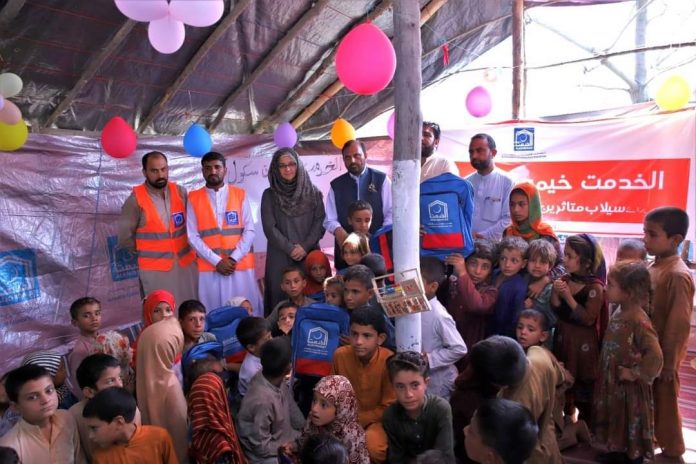 Al Khidmat Foundation (AKF) has setup a tented village and a school for 28 Afghan refugee families living in Hassankhel area in the vicinity of Sardaryab locality of Charsadda.

Their houses were washed away during the last month devastating floods; however, later, Al Khidmat Foundation setup a tented village for the homeless refugees.

AKF KP president Khalid Waqas Chamknai said that the floods have caused widespread damages in KP and his organization was engaged in relief activities since day one.

Mr Chamkani said that the philanthropists were helping the AKF in providing relief to these people.

He said that rehabilitation of the flood affectees was an arduous task; however, AKF will struggle in the process.

Mr Chamkani also appealed the local philanthropists to contribute in the rehabilitation of the flood affected persons so they can return to their normal lives.

He said that the after learning about the Afghan refugees problems on social media, AKF did setup a tent village in the area. In addition to this, he said that they have also setup a tent school in the village which will educate the children of refugees as well other children, engaged in begging at picnic spot of Sardaryab.

ADC Safi at this occasion praised the AKF role in helping and rehabilitation of the flood affectees and said these efforts were praiseworthy.

She said that district administration will help the AKF in its relief activities.

Waheedullah, AKF provincial manger for education in his speech said that his organization was helping flood affectees from day one and will also strive to play its role in their rehabilitation.

Naseemullah Shaheen, an organizer of the tent village said that currently 60 children have been enrolled at this school including both refugees as well baggers.

He said that these students will take classes for two hours a day at the schools. Mr Waheed said that currently there was only one teacher; however, another teacher will be hired soon.

Nasee Khan and Saifur Rehman, two locals expressed their happiness over the setting up of tent village and school. They said that this school will enable the children to read and write.

Besides, they also appealed to NGOs and other organizations to help Al Khidmat Foundation in this regard.