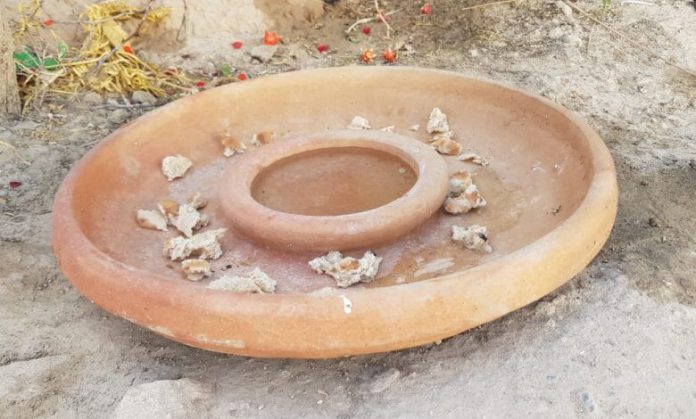 Gul Mohammad, a resident of Miagan village of Mohmand district has set an example for the revival of habitat of different birds including sparrow, blackbird, crow, quail, parrot, black owls, hawk, pigeon, woodpeckers, dove and seasonal birds in his area.

Mr Gul has bought special bowls in which he places water and food including grains and bread crumbs to feed birds.

Mohmand is among the five tribal districts of Pakistan, which is facing decreasing levels of water, adversely affecting animals and plants as their habitats are disappearing.

However, Mr Gul is trying to safeguard the species and habitat of these birds.

“To make a best habitat for birds, I have planted so many trees, vegetable and fruits plants in my home,” he said. Besides, he added that on daily basis he is used to put fresh water and the breadcrumbs in the bowl for birds.

Mr Gul said that they were 13 family members and he has taught them about taking good care of birds.

He said that once his eight years old grandson Izaz bought home sparrow home. “On inquiring, the child said that I bought this sparrow to give it medical treatment and protect from other animals and children.

Mr Gul said that he was very happy to see this level of interest in animal welfare from his grandson. “I feed the birds even waking up in the morning,” he said. Mr Gul said that the pleasant sounds of birds made him very happy.

He said that it was Muslims duty to protect birds’ animals. “Even Prophet Muhammad Peace Be Upon Him has said that the planting trees and making bird’s habitat safe was sadqa-e-jariya,” he said.

Mr Gul said that due to scarcity of water, climate change and low rain fall, the different species of birds were disappearing from Mohmand.

He said that there was a mountainous area along my village, which was called Smasa or a mountainous habitat for owls where the black owls used to give birth to their species and setting their habitat.

“The Smasa was like a cold and windy place against warm weather and perhaps for the same reason owls dwelled there,” he said.

However, he added that due to excessive shortage of water there were no more owls left in his village.

To overcome the water level and revival of agriculture, the government has been established three small dams in the area. The local residents believed that they will make rise in water level and with the passage of time we will be able to cultivate crops, seasonal fruits and vegetables.

Fazl-e-Haadi another resident said that due to shortage of water the people were forced to bring drinking water from far flung areas.

He said that once their villages were very beautiful with green crops, plants, trees, vegetable and fruits

However, he said that due to low rain fall and water scarcity this area has been changed into barren land.

Some years ago, we used to cultivate wheat, corn, mustard, grains, sunflower, sugarcane and many other types of fruits and vegetables.

Regarding the reasons of water shortage, he said that there were many theories existed to explain the situation.

“Some people blame plantation of eucalyptus plants for the water shortage, as the plant is said to have sucked a huge amount of water from earth, depleting underground aquifers,” he said.

He claimed that the people planted the same plant in order to suck water from waterlogged areas near rivers locally called Jabbas.

Besides, this installation of solar tube wells, which suck water from great depths, increase in population and conversion of agricultural land are some of the main factors in the water crisis.

In spite of the severe shortage of water and declining water level, some people were hopeful that due to the concept of establishing small dams, construction of Mohmand Dam, plantations will led to rise water level in Mohmand tribal District, which will be ultimately the golden days for revival of habitat for thousands of plants, insects, birds and so many other animals, which are the utmost important, urgent and most lovely part of our ecosystem.

The writer is a Radio Producer and tweets on @Muradonline123.