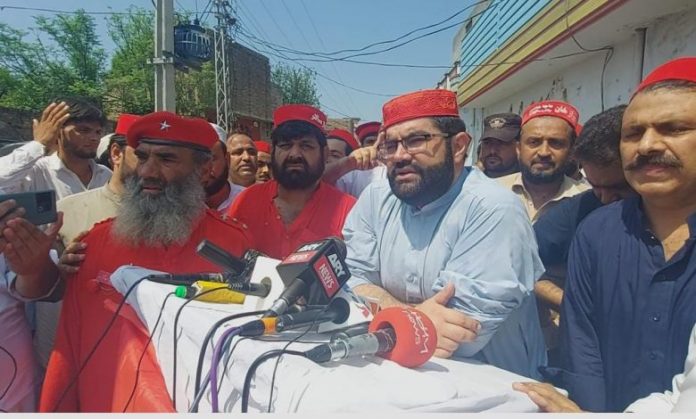 Awami National Party (ANP) has announced investigate the Babara Massacre of 1948 after coming into power and deal with those responsible for the killings as per law.

On August 12, 1948, police had opened fire on protesters in Babara area of Charsadda district, which resulted into killing of more than 600 people.

On the 74th anniversary of the Babara Masscare, ANP Khyber Pakhtunkhwa president Aimal Wali Khan laid a floral wreath at the memorial.

In his speech, Mr Aimal said that police opened fire on peaceful protesters at the orders of the then chief minister Qayyum Khan, which resulted into deaths of more than 600 people including women and children.

He said that every year, ANP has been demanding to take those responsible for the killings to the account.

However, he admitted that it was mistake to not to investigate the incident in the ANP’s last tenure in the province which lasted from 2008-13.

“It was our mistake to not investigate the massacre; however, we will probe the matter when come to the power next time,” he said.

He said that Pashtun nation was still deprived of its right to have a say its own resources.

However, he said that incidents like Babara took place in countries where violations of human rights are common practice.

Mr Aimal said that in the US a man was suffocated to death by police; entire country erupted into protest. However, he said that in Babara, FIRs were registered against the victims and drums were beaten outside their homes on August 14.

Syed Raza Shah, a Charsadda based journalist said that information existed about those behind the massacre. He said that an FIR of the incident also lodged at the Parang police station.

“Those involved in the murders could be punished symbolically,” he said.

He said that it was not possible to punish the perpetrators in the manner as when they were alive; however, even accused who have died could be punished.

What really happened in Babara?

Babara is small time village of Charsadda district, where police opened fire on protesters a year after creation of Pakistan on August 12, 1948.

ANP on the other hand alleges that the fire was opened following the orders of the then chief minister Qayyum Khan.

Dr Sohail Khan, head of Pashto department at the Abdul Wali Khan University has noted in his book ‘Tarikh Charsadda’ on April 22, 1947, Dr Khan Saab government of the erstwhile NWFP was dissolved and a minority government of Qayyum Khan was formed in its place.

He noted that Quaid-e-Azam afterward met Bacha Khan and regretted for his mistake of dissolution of the government and said that lawlessness and corruption has increased in the province, therefore, they should rejoin the government.

Dr Sohail noted that Bacha Khan told Jinnah that he will get the approval of jirga for this proposal, which did not agreed with it.

Later Bacha Khan asked Jinnah to visit their center in Sardaryab area of Charsadda, which was accepted by the later.

Dr Sohail said that Qayyum Khan and his cronies considered this meeting as threat and printed fake news in the newspaper regarding threat to the Jinnah life during his visit to Sardaryab.

Upon this Jinnah instead of visiting Sardaryab went to Peshawar where he made an address.

On June 15, 1948, Bacha Khan and his associates were jailed, which led to the huge protests. However, government had already imposed section 144 and fire was opened on the protesters which led to the killing of more than 600 people.

In addition to this, Dr Sohail noted that government announced to make the victims’ families pay the price for bullet fired at the Babara.

“Many people even hid death of their family members to avoid payment of Rs 100 per bullet,” he noted.

Dr Sohail noted that later Qayyum Khan spoke at the floor of assembly and said that firing was opened as the protesters who had gathered in violation of section 144 refused to disperse.

He said that Khudai Khidmatgars were lucky that protesters were lucky as police personnel had run out of bullets; otherwise, all of them would have been killed.

“This shows that more than 600 people had been killed in the massacre,” he said.