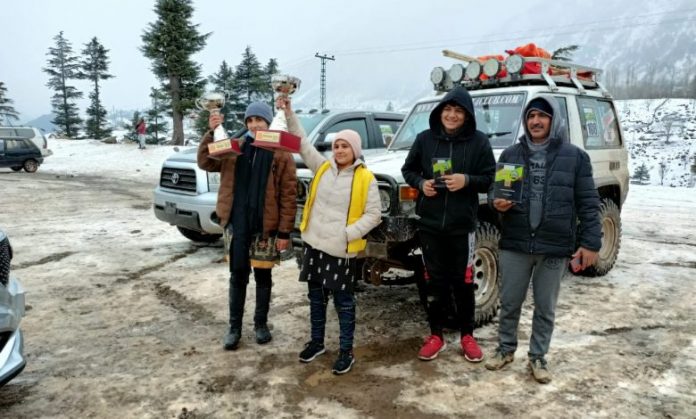 The Snow Jeep Rally was arranged in the Shahi Ground of Kalam area of Swat. Besides Ayesha, Shakil Burki clinched first position in men’s category. The Frontier 4×4 Club  had arranged the event and around 70 male and female motorsports enthusiasts from across the country participated in it.

Ayesha Bibi covered the three kilometers distance in a minute and 48 seconds, while rest of the racers took more than two minutes to cover the same distance.

“I am really happy to win this race,” a jubilant Ayesha told TNN. She said that she was taking part in this competition for the first time. However, she also asked the other women to take part in such health activities.

She said that the track was a difficult one; however, she had practiced on it a day earlier, which made her job easier.

Ms Ayesha said that her father Babar Yousafzai was the president of the Frontier 4×4 Club  and had also trained him for the motorsport. She said that a four by four vehicle was necessary for taking part in this competition.

She said that also takes part in the Indus Crossing competition which takes places in Swabi district in summer.

Frontier 4×4 Club  and district administration had jointly arranged this event. A large number of motorsports enthusiasts from different parts of the country took part in the event. The racer showed their grit and expertise in driving in difficult snow covered track.

President Frontier 4×4 Club Babar Yousafzai who is also Ayesha’s father said that he worked hard with his daughter. He said that it was a major achievement for his daughter this young age. Mr Yousafzai said that they allowed Ayesha to turn up on the track after special training.

“The club issued a temporary permit to Ayesha after seeing her competence and enthusiasm for motorsport,” he said.

Mr Yousafzai said that they were providing off-road training to teenager from 14 to 18 years bracket. He said that the off-roader upon turning 18 can easily take part in international competitions.

He said that this event was aimed at promoting winter tourism in the area.

On the other hand, locals of Swat, which saw the worst under the Taliban, are happy with women taking part in the sporting events.