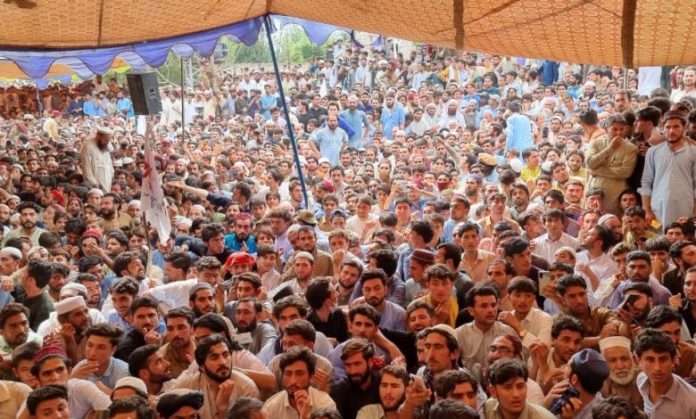 Jamiat Ulema-e-Islam (JUIF) Bajaur has said that its ongoing sit-in against targeted killings and lawlessness in the district will continue till peace assurance from country’s top leadership.

JUIF workers have staged a sit-in outside the Khar Civil Colony since August 9 demanding an end to targeted killings and lawlessness in the district.

Local elders and traders are also supporting JUIF in its protest.

Nisar Baz Khan, head of protest’s negotiating committee said that their protest will continue till the country’s top leadership offers them assurances of peace.

He said that political leadership of the Bajaur, elders and traders were supporting the sit-in and demanding peace in their area.

The sit-in organizer and JUIF Bajaur’s amir Maulana Abdul Rashid told TNN that earlier they had ended their protest which had started following the killing of party’s leader Qari Ilays after assurance from authorities. However, he said that targeted killings did not stopped, which forced them to stage a sit-in again.

Maulana Rashid said that JUIF 16 leaders have been murdered over past some years. Similarly, two of his party leaders were killed in North Waziristan.

On the other hand, district administration has said that it was ready for all kinds of cooperation with the protesters.

However, the protesters have announced that they will negotiate with the KP government, Corps Commander Peshawar and Inspector General of Frontier Corps.

The protesters charter of demand demands guarantees of peace in the district and arrests of the murders of political leaders and other civilians killed earlier this year.

In addition to this, it also demanded the state to use all resources at its disposal to curb terrorism.

Similarly, the charter of demands said that FC should be responsible for incidents which take place in its limits while SHO of relevant police station will be held responsible for any terrorism incident in his jurisdiction.