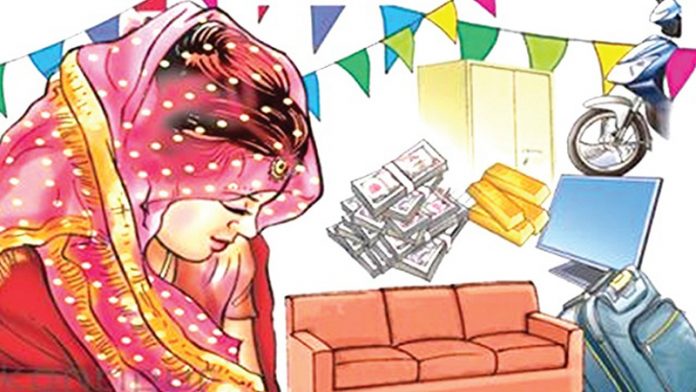 As a child I used to think that a girl is really lucky, she gets so much dowry like clothes, jewelry, crockery, furniture and sometimes even a car or a house of her own choice. However, when I gained intellectual ability, I realized that dowry is actually a price which is paid for her comfortable life after marriage, a price which sometimes burdens her family under debt for lifetime.

This concept was also revealed to me that in this greedy society, when girls are born in a low-income family, the parents become deprived of a peaceful sleep at night. One of the reasons for this is the lack of good proposals for girls and the second is the long list of demands by the suitor’s family like they are doing shopping in a shop. These demands are expressed openly in some cases, while other times, indirectly through gestures. It seems like a girl is not a human being but an inanimate and expensive thing that they are buying.

Have you ever thought that when a mob of 500 to 600 people reaches at a wedding ceremony it seems like they have come for a war and are marching towards the war zone, where the girl’s family is the enemy and boy’s family has come to conquer them?

I have friend with a strange home environment. Two girls got married and came to their house, one of them brought considerably lavish, valuable and expensive dowry while the other girl who came from a low-income family brought inconsequential and moderate dowry. In that family, the respect and dignity of both the daughters-in-law is measured according to the dowry which they brought with them. The daughter in law who brought expensive dowry is respected more and is treated well as compared to the other daughter in law who brought less valuable dowry, rather, it is said that the latter is tolerated only because she is their son’s choice.

Are they all part of the same plate?

I don’t think every family would do that. Let me give an example of an incident. A daughter belonging to a Muslim family was getting married in Lucknow, the people living in their neighborhood were non-Muslim but as neighbors, they were also invited. After the marriage when the bride was leaving, the girls from the neighborhood asked the bride’s mother whether they had sent the dowry before the marriage because they did not see any luggage outside the house. The mother’s reply to this was that the boy’s family was only interested in the girl and they took her with honor and said you are giving us a piece of your heart what else would we need.

I tried to understand this issue in the light of Islam in order to comprehend the status of dowry in shariah. Whatever I have read on the issue of dowry, from that it is explicable that if the parents happily give a gift to the daughter according to their status and income, in which there is no element of pomp and display, it is acceptable in Islam.

Contrarily, if the burden of such demands is put on them without their consent, which they cannot fulfill, then it is strictly forbidden.

I believe dowry is an undesirable ritual. Whenever it is mentioned, the problems associated with it are identified yet this social tradition continues to this day.

Sometime ago, I saw a picture on United Nations website used for the campaign “no to dowry” in which a bride is pulling a car which is fully filled with dowry and the groom is also sitting in the car. Along with the picture different hashtags were used such as “stop dowry” and “do not exhibit”.

That picture was self-explanatory hence did not need any caption. It was a slap for the greedy, unethical and insensitive society, that how a girl and her family are forced to put burden of others’ expectations on their shoulders while starting a new chapter of life.

I was also doing some research to write this blog when I read a heart-wrenching news published in 2016 by BBC urdu.com.

The news was published by Shakeel Akhtar from India, in which he stated about the deaths of newly married girls, in India, because of dowry, in the past three years.

According to the National Crime Bureau of India’s records, more than thirty thousand cases of dowry were registered in the past three years while twenty-four thousand and seven hundred girls were killed because of the tradition of dowry.

Let us all play our role to end this tradition that is degrading our moral values. Together let’s take the initiative to create a commiserative society where the morning newspaper is filled with the news of the success stories of girls instead of the stories about in-laws demanding dowry and girls being killed because they failed to provide dowry.

It is my, yours, and all of our duty to cleanse the society from the outdated and anti-women tradition of dowry.

Do you think dowry is right or not?

Sadia Bibi is a student and also writes blogs on different social issues.