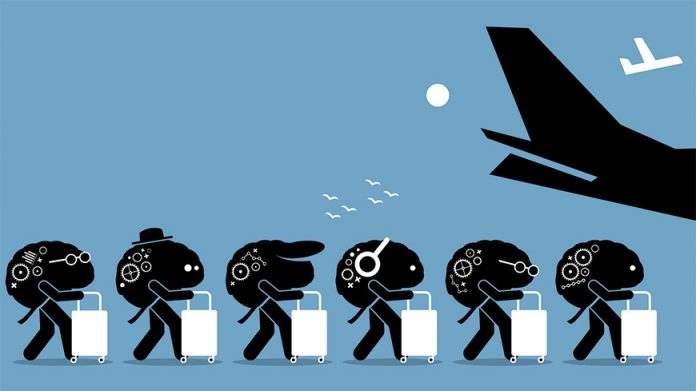 Are you aware of what is happening with our country’s educated youth?

They cannot see any scope of a bright future in Pakistan. They are extremely disappointed and want to leave the country at any cost. I am shocked that how can the government be incautious about this issue.

I talked to a friend about this on call. She told me about Khyber Pakhtunkhwa’s famous Ghulam Ishaq Khan Institute of Engineering Sciences and Technology (GIKI), stating that every year thousands of university graduates are contacted by international IT institutes and are offered work. Contrarily, no one contacts them from within Pakistan.

This situation is not just limited to one university.

It’s not that the government is unaware about how shockingly brain drain is amplifying. The data available with our departments is clearly stating about brain drain. But the politicians are only concerned about their positions. While seeking votes, false promises are made to give jobs to the youth, but later they are not fulfilled.

As a consequence, millions of youth have left the country due to the deteriorating condition of the country’s economy. This trend is continuously growing, and mostly includes doctors, engineers, nurses, MPhil and PhD students and other skilled people.

Unwillingness to return back home

I have a question for all of you, who wouldn’t want to return to their country from abroad? This reminds me of the saying of elders that every place where you are happy and at peace is good. Brain drain has increased to such an extent that if youth is sent abroad on scholarships to study, hardly a few of them find it suitable to return back home.

The worrisome thing is that no one is ready to think about what talented and skilled people are prepared for by spending billions of rupees? Is it so that they can use their creative thinking for the development of other countries? Sadly, those who have the responsibility to find answers to these questions have their mouths locked. We are probably the only nation in the world that does not consider the withdrawal of talented people from the country as a big deal.

Everyone knows about the deteriorating economic condition of our country. Those who have completed their education are looking for jobs. Those who have a few resources are sending their children abroad out of frustration with the situation in the country, because of which our country is losing its intellectual capacity. The government should create more employment opportunities so that the unemployment rate can be reduced and the youth can play a role in the development of the country by staying in their own country.

Poverty is also one of the reasons why creative minds are forced to leave the country. In this age of competition, it is common to live a life with inferiority complex in Pakistan. Now in such a situation, creative people using their creative ability give priority to other countries in order to create a brighter future for themselves. Nevertheless, what hurts my heart is that an educated person can make his future better this way, but what can a poor person do? Shall he spend his short life waiting for his wishes to come true?

At present, there seems to be no effort to stop brain drain. The fact worth pondering is that nobody is even thinking about countering brain drain. Nor does there appear to be a forum that can be a tool to resolve the issue between such youth and the authority. Immediate steps should be taken to listen to the problems of the youth, understand them and solve them.

If the government does not try to solve the problems faced by the youth, then in the future, every institution will have to call upon talented and intelligent people at expensive rates. Therefore, it is better to focus and spend on our own youth so that our country can benefit in future.

In your opinion what necessary measures should be taken to prevent brain drain?