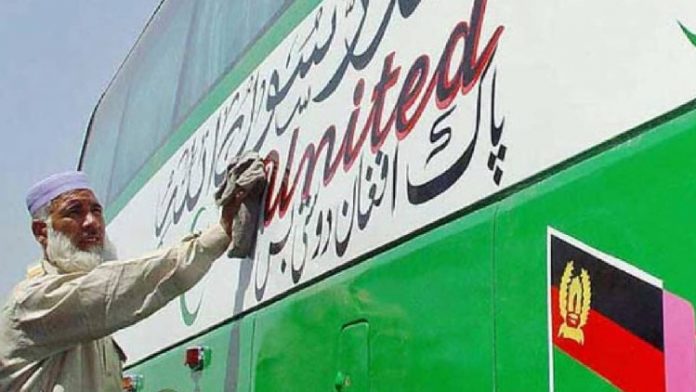 The revival of Pak-Afghan Dosti Bus Service, which is scheduled for the end of next month, is likely to alleviate travel related miseries of people travelling between both countries.

Both the countries had earlier this month decided to resume suspended bus service between Jalalabad and Peshawar by the end of next month.

This decision was made during the visit of a Pakistani delegation headed by federal secretary commerce Muhammad Sulaeh Ahmed Faruqui to the Kabul from July 18-20.

According to Pakistan Embassy Kabul’ statement, both the countries decided to resume the bus service between both countries.

Earlier in November last year, both sides had shown willingness to resume Friendship Bus Service; however, the service could not resume due to the unavailability of suitable transport company.

The bus service was started as pilot project in March 2006 and formally launched later on May 26 the same year.

During the peak of its operations, the bus service catered to 1000 passengers a day; however, some six years ago it was stopped due to tensions between both countries.

Commissioner Peshawar division Riaz Khan Mehsud said that they have chalked out a security plan to ensure protection of the bus service and its passengers together with the security forces.

He said that after the resumption of bus service, immigration officials will check the travel documents of the passengers and other facilities to keep the travelers from any hassle.

Mr Mehsud said following the success of Peshawar-Jalalabad Bus Service, in the next phase the bus service between Kabul and Islamabad will also be started to facilitate travelers between both countries.

Under the project, 40 buses from each country will carry passengers to the other country. The service is likely to be great help to families of Afghan refugees, businessmen and people travelling to the other side of the border for work.

Shah Wali, a Peshawar trade hailed the announcement of bus service resumption and said that this service was a symbol of friendship and fraternity between the people of both countries.

He said that in case of bus service resumption, people will find easier to travel to the other country. Mr Wali said that currently he used to hail a taxi at Karkhano Market of Peshawar which unloaded him at the Torkham border crossing.

“I hail another taxi from Afghan side of Torkham for Jalalabad,” he said. Mr Wali said that this was too much of a hassle as well as expensive.

Siraj Shinwari, a Jalalabad based businessman said that people wait for hours at the border to cross it.

He said that many people visit Pakistan to meet their families while other travel for their treatment and many traders also travel in connection with their business.

In addition to this, he said that many people even prefer not to travel due to these travel related problems.

“Resumption of Pak-Afghan bus service is a positive development,” he said.

On the other, a proposal has also been floated for launching a similar bus service from Balochistan.

However, Pakistan has decided to start the service via Torkham in the first phase.

In addition to this, both sides during their talks besides resumption of bus services also decided to increase the operational timings of all borders crossings including Torkham, Kharlachi, Ghulam Khan and Chaman.

It is worth mentioning here that the trade volume between both countries stood US$ 1.55 billion in 2021-22 with Afghanistan exporting goods worth US$ 834 million and importing US$750 million from Pakistan.