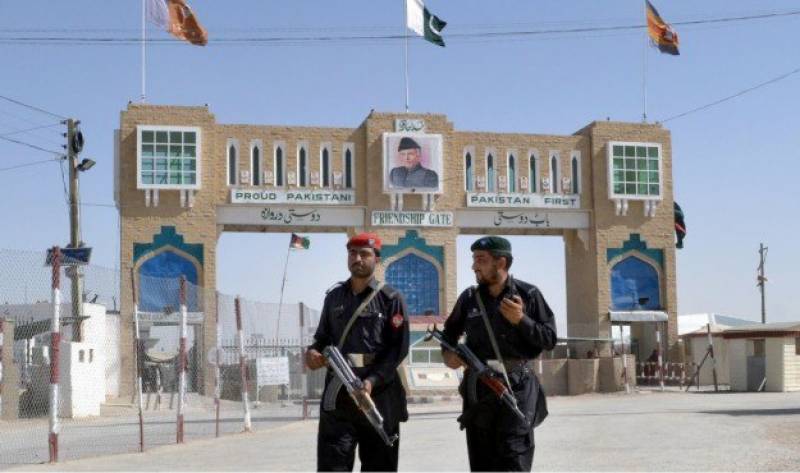 Pak-Afghan border has been shut down indefinitely following firing from Afghan side left a solider dead and two others injured at Chaman border crossing.

The martyred officer was identified as Rehmatullah whose funeral prayers were offered at the FC headquarters.

Dawn newspaper reported that following the firing from Afghan side, both the Pakistani and Afghan border guards traded fire for about an hour. The firing reportedly left five Afghans guards dead while 14 others injured and seven of them have been admitted to the Kandahar hospital.

The closure of border has also brought the Pa-Afghan transit trade to stand-still.
Deputy Commissioner Chaman Abdul Hamid Zehri confirmed the closure of border crossing. DC Zehri said that firing on Pakistani security personnel deputed the Pak-Afghan friendship gate led to the martyrdom of a solider while two others were injured.

Afghan border guards opened fire after the firing which was responded by the Pakistani side.

DC Chaman said that following the firing, Pakistani authorities called a meeting with their Afghan counterparts and demanded for handing over of person who had opened fire and both sides again resorted to exchange of fire on Sunday evening.

The official said that following the incident, security has been beefed up at the border crossing and no one will be allowed to cross the border.

He added that the border will only be opened after Afghan authorities will hand over the attacker, who opened the fire, to Pakistani side.

The closure of border crossing has also suspended the bilateral trade and long queues of trucks and containers were stranded on both sides of the border.