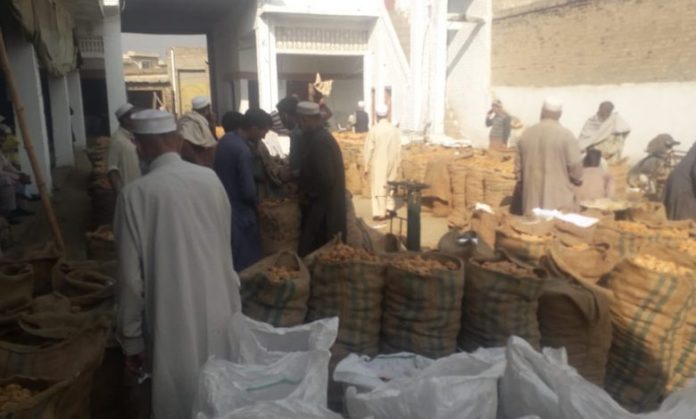 More than three months after devastating floods played havoc to their livelihood, Charsadda district farmers are facing still grappling with the aftershocks of floods.

August this year floods had destroyed crops standing over an area of 11,000 acres in the district including 5,000 acres sugarcane crop.

The farmers told TNN that they had borrowed money from dealers for these crops; however, now unable to pay their creditors.

Zahid Jan, a farmer who had planted sugarcane on his fields said that the floods destroyed his crop standing over 10 jaribs. He said that the flooding water have deposited a thick layer of slit over his holdings and now they were working with tractor to make them cultivable again.

Besides, he said that he had also borrowed money from dealers and now unable to pay this amount.

“Government should pay Rs 100,000 per acre to the affected farmers,” he said.

Similarly, the floods have also badly hit the gurr or jiggery traders. Saeedullah, president of gurr mandi traders said that floods have affected 50 out of 150 traders supplying them with sugarcane.

However, he said that the money paid by the government to the farmers was negligible. He said that if the farmers did not repay their loans this time, then, they will not able to lend them money next year.

“I am in credit business for past 28 years and we lend them interest free money for insecticide and other expenses,” he said.

However, he said that gurr making plants have remained idled this year after the floods destroyed the floods.

The floods destroyed sugarcane crop standing on sides of River Swat and River Kabul in Charsadda district. KP government has announced to compensate the farmers at the rate of Rs 10,000 per acre; however, they are not satisfied with the compensation.

They said that provincial and district government should have listened to them before announcing the compensation amount.

On the other hand, Zahid Jan said that he had borrowed Rs 450,000 for the crop; however, the compensation was even not sufficient to repay this loan.

In addition to this, he said that they have make arrangements for next year crop.

Government should seriously reconsider this issue, he said.

An official of agriculture department said that farmers have yet to receive compensation amount of Rs 10,000, which was very little.

The official said that the PDMA should increase the amount to Rs 30,000 per acre.