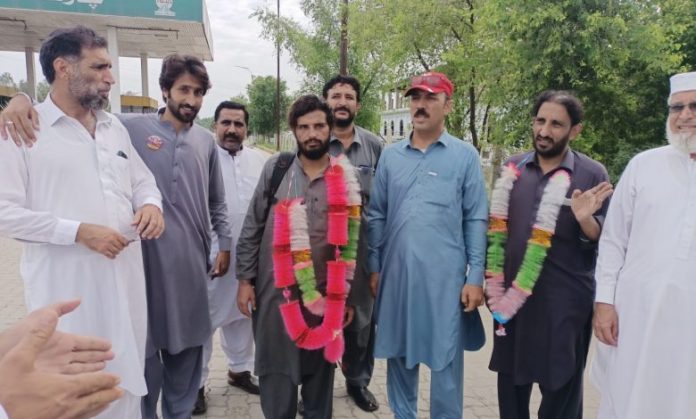 A Charsadda resident who was kidnapped some two months earlier has been recovered Kashmor district of Sindh.

The kidnappee identified as Fazal Jan said that he kidnapped by honey-trapping. “I went to Sadiqabad area of Punjab to meet the unknown female with whom I was in contact on phone, after she asked to meet her,” he said.

He said that a man carried on him bike to the kidnappers after he arrive in Sadiqabad.

Mr Jan said that he spent two months in the kidnappers’ custody in forests. “They were demanding my family to pay Rs 6 million in ransom and kept him in chains throughout this period.

Besides, he said that the kidnappers also tortured him.

He said that the leader of the dacoit’s gang came to him some days back asking him about Aimal Wali Khan. “Police is pressuring us for your release due to Aimal Wali Khan’s influence,” he quoted the dacoit saying.

About two weeks, a youth delegation had gone to Sindh to ensure Mr Jan’s release and Awami National Party delegation also went to Sindh. Mr Jan was handed over to the ANP delegation on August 21.

The release of kidnapped person has came at such a time, when the ANP and its allies, the ruling Pakistan Tehrik Insaf and Jamaat Islami candidates are in the running  on  a by-elections for the National Assembly seat from the district scheduled for September 25.

Political parties are trying to claim credit for Mr Jan’s release to curry favor with the voters.

Fazal Muhammad Khan, a local PTI leader claimed in a public meeting that his party workers have ensured Jan’s release and bringing him back to Charsadda.

Similarly, Fawad Khan, a JI’s local leader took a dig at the ANP and said that political parties should not take credit for the Mr Jan’s release due to the efforts of area’s youth.

However, other Charsadda locals have hailed the release of the Mr Jan and said that it was major achievement that he was reunited with his family after two long months.