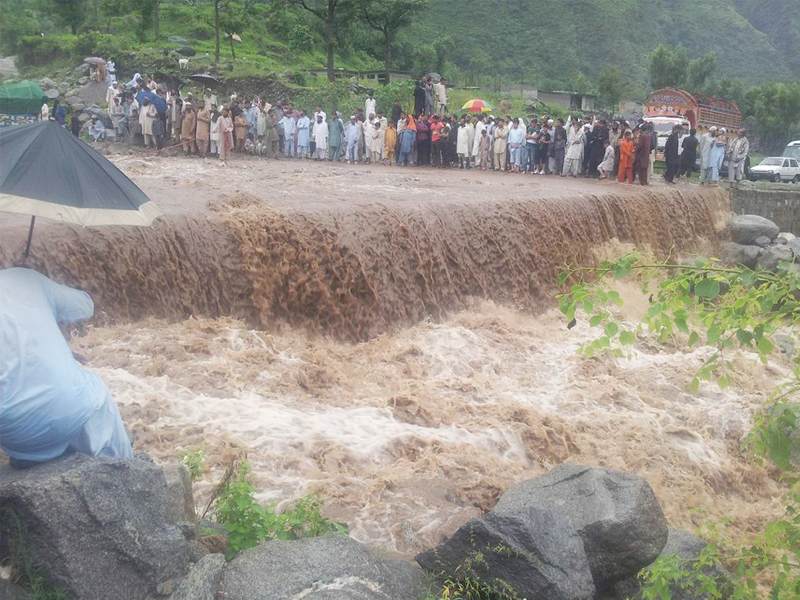 Pakistan is particularly susceptible to extreme weather as well as other consequences of climate change, such as coastal intrusion, odd rain cycles, increasing temperatures, and dryness, according to climatologist.

In a joint report released last year, the World Bank and the Asian Development Bank predicted that Pakistan’s temperature would increase by 2.5 degrees Celsius over the following two decades, adversely hurting agricultural output.

Although the government claims to have preparations in action, Pakistan is facing a significant climate change threat. Several areas of the country have been submerged due to recent rains across Pakistan. There is a possibility of floods and more areas being submerged in the country.

The Met department has predicted more heavy rains in Sindh, Balochistan and South Punjab during this week. On social media, there are disturbing scenes depicted in footages from Khyber Pakhtunkhwa and several regions of Sindh and according to the Meteorological Department, more rains are likely to occur.

According to the UN’s Intergovernmental Panel on Climate Change (IPCC), Pakistan would suffer more from the effects of climate change in the near future.

Pakistan’s agriculture experiences more disease outbreaks and crop damage as a result of rains, floods, and heatwaves. An unavoidable effect of climate change is that warmer weather causes the wheat formation phase to occur more quickly in drylands of Pakistan. The unexpected temperature changes and water restrictions have affected the crop, according to the head of a producers’ and exporters’ association.

Water resources are seriously threatened by climate change. The country’s productive, household, and agriculture sector urgently requires the supply of water. Pakistan lacks both the managerial abilities and the vision necessary to fight climate change. Both a lack of water and improper watershed management are harmful to the survival of the nation.

The most recent energy crisis in Pakistan has crippled an already overworked and deteriorating grid system that is unable to supply the rising power requirements across the country.

Gilgit-Baltistan will face rocks and landslides due to expected rains. The areas that are already experiencing low to medium flooding need to be taken care of. The Kabul River has low level floods, so the adjoining districts and tehsils will be flooded at the lower level.

Senator John Kerry phoned Pakistani Minister Sherry Rehman to discuss the difficulties the nation was experiencing in the field of climate change and to convey his desire to collaborate with Pakistan to address these issues.

The Ministry of Climate Change has also expressed concerns about the possibility of torrential rains in metropolitan areas this year, including river and river floods.

Extreme weather events, rains, droughts, hurricanes, and sea level rise have a serious effect on people’s lives in metropolitan areas. The warmest city in Pakistan will be Hyderabad, which will be followed by Jacobabad and possibly Karachi as well.

The Meteorological Department has predicted submergence in the areas of Punjab and flood in hilly and local rivers ofBalochistan and nearby areas.

Rains are much higher than normal in Sindh and Balochistan this year. Pakistan is among the countries most affected by climate change due to increased greenhouse gas emissions from around the world.

According to the National Disaster Management Authority, more than 150 people have died in the country due to rains in the last one month

Environmental activists claim that because of insufficient government measures to address forests and carbon emissions, Pakistan is highly susceptible to the consequences of climate change.

Climate change is mainly caused by the industrial revolution. Earth’s temperature increases as a result of industrial activity like the combustion of coal that contain carbon dioxide. Climate change poses the biggest threat to the national security of independent states, according to the US Department of Defense. Our planet and atmosphere are both changing due to climate change.

The levels of toxic substances in the atmosphere and on earth are dangerously high. Groundwater and food that has been cultivated on the ground have both been contaminated by industrial waste. There are both droughts and floods due to the same pollution that is changing the weather.

The atmosphere’s carbon dioxide is captured and stored by forests. As a result of their removal, carbon dioxide accumulates more quickly because there are no plants to soak it. Additionally, when we fire trees, the carbon they held is released.

Human activities and greenhouse gas emissions are the primary causes of climate change. The climate system can alter for many different reasons, many of which are natural.

Unexpectedly quickly, the climate is shifting. The urgency with which this issue needs to be addressed will ensure that Pakistan and its people are safeguarded and have a higher quality of life.

Departments have been directed to ensure pre-availability of emergency equipment and machinery including pumps and emergency personnel for drainage so that immediate action can be taken in case of emergencies. And, ensure evacuation of low and flood-threatened areas residents to pre-determined safe places and advance availability of food and medicines in shelters.

Nearly all scientists agree that people are to blame for the climate change. This is linked to a rise in weather extremes that endanger human lives and the health of the entire planet. It is the duty of the government to take action and inform the populace of the weather change. The dams should be constructed in order to store water for the future. To raise the economic standing of Pakistan, the policies must be put into practice in all spheres of economic activity.