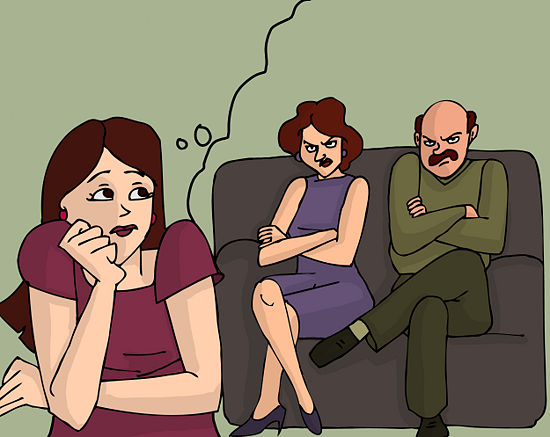 The daughter’s at times are crippled by the same hands who taught them to walk with grace.

In the middle class families, the parents celebrate birth of a girl. They welcome her wholeheartedly, promising her a good future.

From the very beginning, she is encouraged to be brave and is appreciated for her confidence.

She is taught to dream big and stand for her rights. It is made sure that she knows her rights more than her wrongs and raises her voice not just for her own self but for others too.

Her courage is boosted by sharing her courage stories with the world, making her feel proud thus inviting more confidence and courage.

Parents show more enthusiasm when she is participating in co-curricular activities.  At every step she is made sure that she is a blessed child who has got such supporting parents. Their happiness shows no boundaries when she faces the world “bravely” and is not “surrendering” to it. Till this the story is going smoothly. It takes a U-turn when she gets a proposal.

They would say ‘Yes’ even without discussing the matter with her. Here I would say that the daughter who would buy even a pencil with her own choice is now deprived of right-to-choose her life partner. If she resists, she is tagged with different titles and all her pluses becomes her minuses.

The process of tagging begins with “disobedient “. After all the lectures on right to freedom of choice comes the chapter of sacrificing your free-will. They would remind you how they cared for you when you were little and how they supported you in everything.

The daughter is confused for she does not “know” these parents. Her parents were never “her- authority-snatchers”. But pity their memory. They have forgotten all what they have taught her. The society which they never cared about is now, all of a sudden, the most important thing. Long forgotten is the open-mindedness which they had owned to tell people  that they are progressive.

Now if the daughter takes stand for herself, she is called “rebel” whose germs were first actually incited in her by them. She is questioned by questions like “Is there a guy?” Here I believe someone should ask them “Have you not made her enthusiastic about career?”  All that enthusiasm of which they were proud is now dumped on the floor. The parents who once accompanied her in everything have abandoned her in the most important decision. Yes I agree that they have given her the best 20-25 years of life but now they need it to be paid by the next 25. Simple business. Now they want the cost.

The dreams that were appreciated for years are now put aside because the father says who will be with you after us? Without thinking what if he abandons her. And here all the lectures on independence evaporate, breaking the bubble of “Best Parents”. Now she understands that she would exchange her bucket of opportunities with the bucket of sacrifices and it’s just the beginning.

I believe giving someone the courage to fly high and then brutally snatching is unfair to her. Do not teach her dream-weaving in the first place if you do not let her chase them. Do not give her wings if you have to imprison her.

What is your perspective on it?