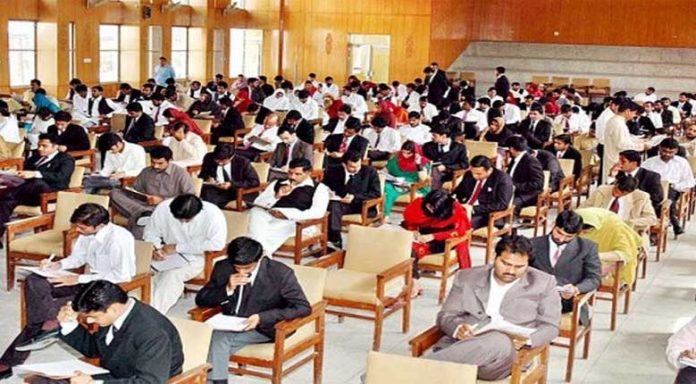 Aspirants of the Provincial Management Service (PMS) examination have objected to the schedule of the initial examination issued for the entrance into provincial bureaucracy.

On July 19, Pakistan Tehrik Insaf MPA Asia Saleh Khattak through a resolution before the KP assembly demanded the postponing the examination till November this year.

She said that Public Service Commission has scheduled the PMS exam for mid-September. However, Ms Khattak pointed out that the days when the examination has been scheduled, most of the parts of province remain in the grip of heat. Therefore, it would be very difficult for all candidates’ particularly female candidates; therefore, the exams shall be postponed till November.

KP assembly unanimously approved the resolution and under the rules now it was provincial government responsibility to postpone the elections.

On the other hand, women aspirants for PMS exam from southern districts of KP have also approached chairman KPPSC that they would not be able to attend the papers properly in extreme heat while observing full veil as districts of Dera Ismail Khan, Bannu, Karak, Lakki Marwat and Tank witness extreme heat.

They demanded to commission to postpone till November.

Ruqqia Khattak, a PMS aspirant from Karak district said that the southern district lacked basic necessities. She said that these districts witnessed extreme heat in September. Ms Ruqqia said that the exam centers selected by the KPPSC usually lacked drinking water as well as electricity. She said that in such a situation it would not be suitable to force the aspirants to sit for examination.

Ms Ruqqia said that though all facilities were available in exam centers of Peshawar; however, no one pays attention to such centers in remote areas. “Holding exams in mid-September in those districts would cause inconvenience for the aspirants as these areas had no electricity for more than 15 hours a day,” he said.

She said that in such situation the aspirants even could not prepare for exams properly.

Besides, she said that how a woman could sit for two papers during a day in such a situation.

Anam Khan, another aspirant from Dera Ismail Khan said that during the days of examination from September 15 to October 12, temperatures in southern districts hover from 45 to 49 degree centigrade. She said that currently when floods have played havoc in those districts, how the aspirants could be expected to prepare for the examination.

Besides, Ms Anam said that Central Superior Service examinations are held in February every year, when weather was very good. “Month of November was very suitable for holding PMS examination in KP,” she said.

Earlier last year, KPPSC has decided to allow only 25 candidates for each PMS seat; however, later under the public pressure all those qualifying screening test to attempt the PMS exams.