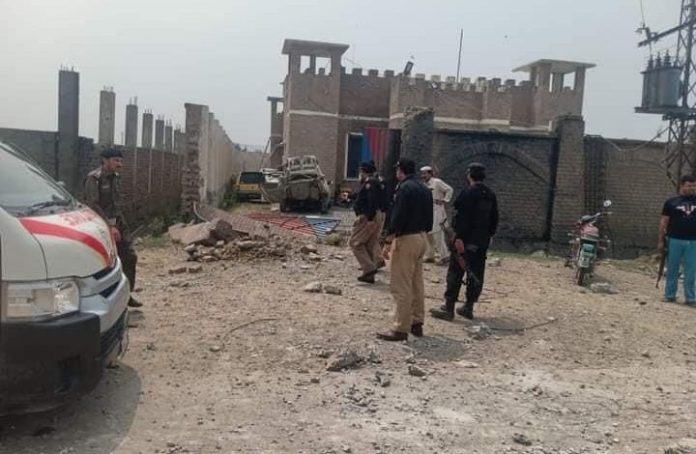 A policeman was martyred and five others including three cops were wounded when an explosion targeted the Chamtar police post in Mardan on Thursday.

DPO Mardan Irfanullah Khan told the TNN that terrorists had planted an explosive device next to the police post gate, which went off with a bang around 10:45am.

He said that the Hawaldar Maqsood was martyred in the blast while police check post in charge Sohail Khan and constables Karim and Fayyaz were wounded.

Mr Khan said that the police have launched a search operation in the area.

Besides, he said that blast destroyed the police post gate while partially damaging its building.

Rescue 1122 responders rushed to the site after the blast and shifted the injure and dead to hospital.

Two injured civilians were identified as Hilal and Muhammad Ishaq.

According to  a police official, a police vehicle was entering the post premises when the blast took place.

Doctors at the Mardan Medical Complex said that check post in charge Sohail Khan was in critical condition while the other cop was discharged after initial treatment.

Police officials were investigating the attack and the explosives used in the blast. However, no one has claimed responsibility for the attack so far.

Separately, a Pakistan Army soldier who had embraced martyrdom in in exchange of fire with terrorist in North Waziristan was laid to rest in his ancestral village in Nowshera district.

Solider Waheed Khan was martyred in exchange of fire with terrorist in North Waziristan, the other day. A large number of locals and military officers attended the funeral prayers.

Shahwar Khattak, father of the martyred cop told reporters at this occasion said that he was proud of his son martyrdom. He said that his son laid his life while defending his motherland.