Home Health Due to climate change, dengue is refusing to go away even in...
Facebook
Twitter
WhatsApp
Linkedin
Email 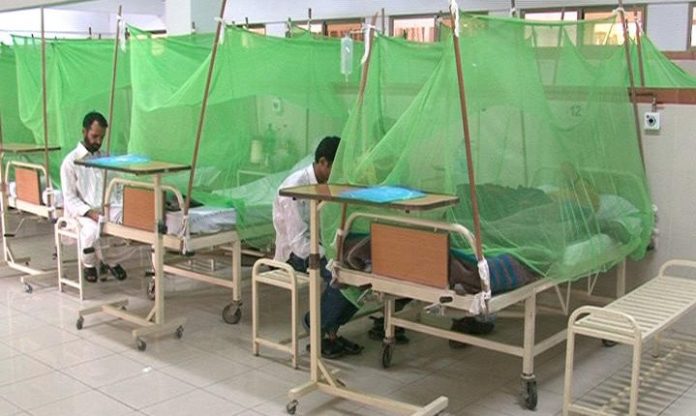 Doctors have termed the prevalence of the dengue fever in the month of November as result of climate change and global warming.

Dr Ziaullah, assistant professor at the city’s Lady Reading Hospital said that climate change besides other things was badly impacting human health. “In the past, dengue fever used to persist till September; however, this time around it has lingered till November,” he said.

Dr Zia said that five to six dengue patients were being admitted to the LRH dengue ward on daily basis while 10-15 dengue positive cases were being reported every day.

On November 11, 2022, a total of 445 dengue positive cases were reported across the Khyber Pakhtunkhwa. However, doctors point out that this figure could be much higher, as large number of people do not get tested and do not consult a doctor or hospital, till there situation worsens.

On the other hand, Dr Asif Khattak, assistant professor of environmental science department at the University of Peshawar said that due to climate change, many diseases have prevalent across the world including Pakistan.

He said that due to climate change, dengue cases were also on the rise in Khyber Pakhtunkhwa.

He said that research showed that increased in temperature led to high growth of dengue mosquito, which also increased the chances one’s catching the fever.

Besides, he said that about two decades back, there used to definite durations of winter and summer; however, due to climate change, these days, the duration of summer was increasing while the winter was decreasing.

“This is also resulting into temperature variations,” he said.

On the other hand, he said that rains were never on time or less than required and this was the reason, these diseases were increasing in KP.

Dr Asif said that one has to prepare himself to fight dengue which included spraying insecticides in one’s street and using mosquito nets to control the outbreak of the virus.

He said that these steps prevented against mosquito bites and can help control the spread of the virus.

On the other hand, Raheem Khan, a resident of Peshawar who was suffering from fever for some days was diagnosed with dengue after undergoing tests. He was admitted to hospital due to less platelets count, where he is currently recuperating.

Dr Ziauddin, professor of medicine at the LRH said that the dengue was caused due to the bit of a mosquito. He said that four types of dengue have been discovered so far including dengue I, II, III and IV.
Dr Zia said that a patient first suffers high intensity fever in dengue coupled with bone aches, vomiting and leading to bleeding from nose, gums and other parts of body.

He said that in case of bleeding, the patient should be immediately rushed to hospital and put on platelet transfusion.

Dr Zia said that usually dengue was treated Paracetamol to bring down fever. He said that dengue patient should rest and also take balanced diet and keep himself hydrated.

He said that most of the dengue affected people from KP were males.

However, he added that due to heavy rains and changing weather patterns, dengue positive cases were being reported even in winter. “The dengue cases are being reported as if it was summer,” he said.