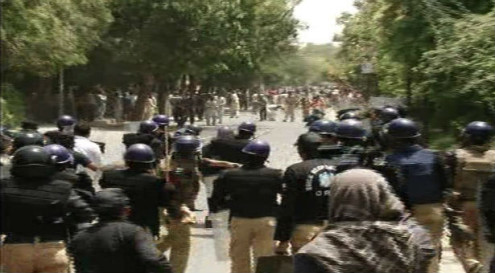 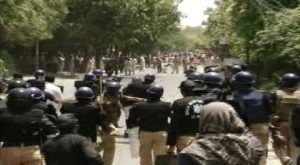 PESHAWAR, June 17: At least eight people including two women were killed while more than 80 others were injured in a clash between police and activists of Pakistan Awami Tehrik (PAT), a party led by Dr Tahirul Qadri, in Lahore.

The hospital administration said 20 policemen were among those wounded.

The police said that early in morning, policemen attempted to remove illegal security barriers around Minhajul Quran Secretariat and the residence of PAT chief.

Enraged over the bid, the PAT workers tried to abort the law-enforcers’ effort and started pelting stones on the policemen.

The police say they arrested 53 accused who attacked the policemen. On the other hand, Tahirul Qadri alleged the police wanted to attack his relatives for some vested interests and that their party activists came to their rescue.

The PAT chief alleged the activists were killed in the police firing.

Tahirul Qadri will come to Pakistan on 23 June. He has already announced to stage protests against the current policies of the government in Pakistan.