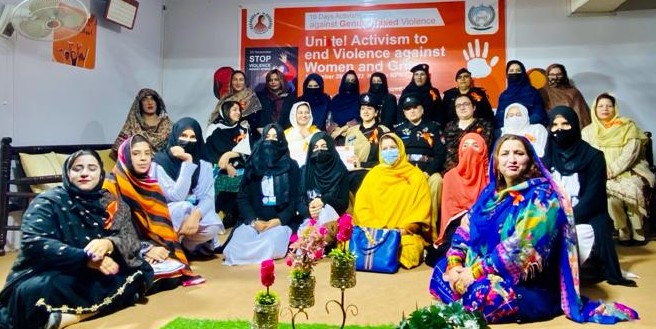 Khyber Pakhtunkhwa Commission for the Status of Women arranged an event to mark the 16 days of activism to raise awareness regarding gender-based violence in Haripur.

The event was arranged at the Government Girls Degree College Haripur and DSP Traffic Shahzadi Noshad Gillani was the chief guest at this occasion.

Chairman designate of the district committee for the status of women Sajida Hasrat Khan opened the event. KPCSW programme officer Aalia Baseer outlined the importance of the 16 days of activism. She said that 16 days of activism was observed every year from November 25 till December 10 to raise awareness regarding violence against women.

Ms Aalia also highlighted the KPCSW role in the empowerment of women and its future course of action. Shahida Parveen Advocate threw light on legal rights of women.

Malaka Hijab, superintendent Darul Aman Haripur in details described the facilities provided by her institution to women victims of gender based violence.

DSP traffic Shahzadi Noshad Gillani said that in addition to ending gender based violence, it was also imperative to empower women. She said that KPCSW was playing an important role in this regard.

Ms Gillani said that the 16 days of activism was reminder to every individual to unite ending gender-based individual, protection of their rights and empowerment.