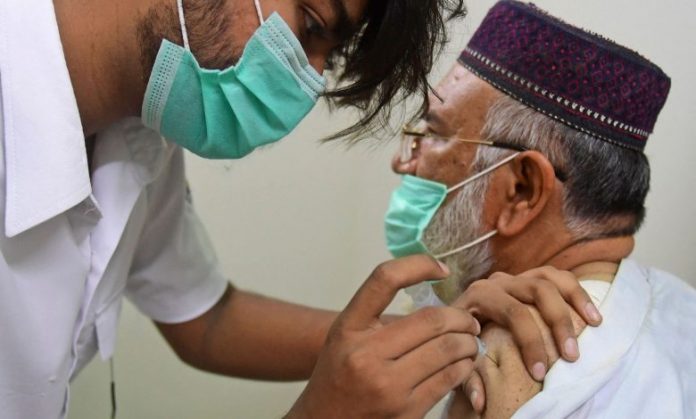 There is no truth in rumors circulating online claiming those who receive the Covid-19 vaccine will die within two years.

Earlier a WhatsApp message which was shared widely claimed that, “Breaking news, all those who have vaccinated against Covid-19 will die within two years and French scientist Luc Montagnier has confirmed it. There was no possibility of survival for those who have taken any of the vaccines.”

This fake message made an already wary public more hesitant about vaccines and its safety in Pakistan.

However, a fact check carried out by the new agency Reuters debunked the statement attributed to eth scientist and said that it was not true.

On the other hand, Pakistan’s Ministry of Health also termed the reports regarding deaths two years after getting the vaccine as fabricated and lacking any scientific grounds. In addition to this fact checking shared on Twitter stated that vaccines reached the general public after thorough research and testing and there were no scientific basis to believe that someone can die two years after getting the vaccine.

On the other hand, a World Health Organization report said that vaccines trained the human immune system to recognize the virus and made the human body ready to fight the virus and was completely safe.

The side effects of Covid-19 vaccines are minimal to people suffering from certain illnesses; however, on the other hand, vaccines efficacy can be gauged from the fact the number of Covid-19 infections is drastically reduced.

On the other hand, Pakistan launched its Covid-19 vaccination campaign on February 2, 2021 by administering a Chinese made Sinopharm vaccine to a local doctor. On February 26, 2002, exactly two years after  the first case was reported, the number of total infections had surged over 1.5 million with more than 30,000 deaths.

Asad Umar, the head of the National Command and Operations Center tweeted that for the first time in two years, there were no Covid-19 related deaths in the country.

On the other hand, Dr Shams Wazir, a medical specialist at the Lady Reading Hospital, said that the vaccination was the biggest reason behind the decline in Covid-19 mortality in Pakistan.

He said that just like the polio and hepatitis-B vaccines, Covid-19 vaccines also have been manufactured. Dr Shams said that the vaccines boosted the human immune system against the virus.

“Human body makes antibodies to fight the virus after the vaccination and the virus cannot harm a vaccinated person,” he said.

He said there were fewer deaths due to the fifth wave of Covid-19 and it was mostly due to the vaccines as a large number of people had vaccinated themselves before the Omicron wave.

Dr Shams said that the claim of vaccine killing people was completely baseless and vaccines are manufactured after proper research and approved by authorities after trials.

Muhammad Iqbal, a Peshawarite while fearing travel restrictions, vaccinated himself in May 2016. “I have not felt any adverse impact of the vaccine so far,” he said. However, he said that when he was getting the vaccine, there were many rumors rife among the people, claiming adverse effects of vaccines.

“I am sure vaccination has no side effects,” Mr Iqbal said.

On the other hand, over 100 million people in Pakistan are fully vaccinated against the Covid-19. In addition to this, over 130 million people have assumed to receive their first dose of vaccine and over 4.8 million have received booster doses as well.