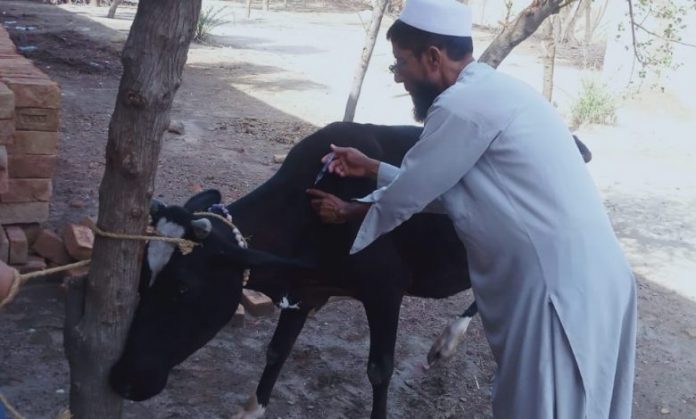 A local allergy treatment center in Charsadda district has claimed zoonosis or transmission of lumpy skin diseases to the humans and several people who have caught the virus visited the center for treatment.

However, on the other hand, health experts have rejected this claim. They said since 128 there had not been single case of zoonotic transmission of the virus recorded. Besides, the doctors said that allergy center was making fake claims to attract people.

The social media post noted that lumpy skin was serious illness and its animal to human transmission has started and they have treated several such patients at their clinic.

The post asked the locals to spread the post and take necessary precautions while on the other locals were using WhatsApp and other platforms to spread this post as a wildfire.

Dr Sajjad, a doctor at this center told TNN a large number of people suffering from lumpy skin were visiting his clinic.

However, health experts rubbished the human transmission of the virus.

Dr Burhan, director the Harichand Livestock Farm said that he has seen similar posts on WhatsApp and Facebook; however, he said that there no reality in such claims.

“Such reports are totally baseless rumors and fake news as the virus only affected cows and there existed no record, evidence or research for human transmission of the lumpy skin virus,” he said.

He said that lumpy skin only affected animals and particularly cows and the animals develop nodules like growth on their skin. Besides, he said that the virus was transferred to the other animals through mosquito bites.

The illness could only be treated with a vaccine. However, he said that if the same mosquito bites a human, it does not cause lumpy skin.

On the other hand, rumors regarding spread of lumpy skin have also affected the meat business in different parts of the province, as locals were avoiding buying meat due to the fear of catching virus.

Dr Burhan said that most of the animals dying of lumpy skin were thrown into rivers and eaten by fish; however, eating those fish which feasted on dead animals was not harmful for humans.

Besides, he said that the virus has nothing to with the allergy cases.

He told TNN that he has not seen a single case of human transmission of lumpy skin over past three years.

On the other hand, Ministry of National Food Security and Research has also denied reports of human transmission of the virus.

In an advisory issued in March this year, the ministry had said that according to the medical research could not transmit to humans. In addition to this, there was no harm in using milk and meat from infected animals.

On the other hand, reverse image search by the TNN showed that picture of man having nodules like growth on his body was lifted from some other page.