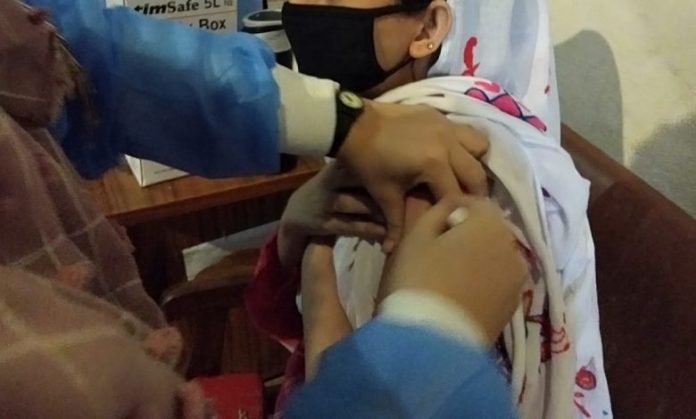 Seemara, 32, a resident of Chamkani area of Peshawar, started having high temperatures, while she was pregnant. When she consulted a doctor, he asked her to take a PCR test which came back positive. “I received the vaccine after ending my quarantine in June 2021; however, my baby was born safe,” Sameera said.

Ms Sameera said that at the start of the pandemic, various rumors regarding vaccines causing irregular periods and it being a conspiracy to control the population were circulating on social media. “I myself fell prey to these rumors as I did not vaccinate myself after the government opened vaccination of those over 30 years last year,” she said. Ms Sameera said that she feared that the vaccine would paralyze her child.

However, she was forced to take the vaccine after recovering from Covid-19; however, her child was born healthy.

Journalist Mubashir Luqman in a vlog on his YouTube channel at the peak of the vaccination campaign attributed to the Russian president a statement that the vaccine was a conspiracy to reduce the world’s population.

He termed the vaccination as biological warfare and the virus has been engineered to solve the world’s food problem.

Mr Luaqman has been a journalist for the past two decades and his YouTube channel has a following of over two million people. On the other hand, his vaccine claims video was watched by over 168,643 people.

However, the question arises whether the Covid-19 vaccine is really a conspiracy to control the global population.

Dr Gul Nigar, a specialist at the district headquarters hospital Charsadda said that there was no research or other evidence substantiating irregular periods and issues in childbirth due to the COvid-19 vaccine being currently available.

She said that a large number of pregnant women were vaccinated against Covid-19 and they gave birth to healthy babies.

However, she said that pregnant women usually faced a number of health problems and not vaccinating them against Covid-19 made both the mother as well as the baby vulnerable.

Besides, she said that Covid-19 vaccines do not affect any other illness; however, added that one should not receive the vaccine while having high temperature as it made the immune system a bit weaker, which may lead to higher body temperature.

In addition to this, Norwegian Institute of Public Health surveyed 60,000 women in a study, wherein the women four out of 10 women in the age group of 18 to 30 years reported changes in their menstrual cycle due to the vaccination.

The study said that these four reported more bleeding after first and second doses of the vaccine; however, it was temporary.

It said that the menstrual period returned to normal levels about three months after receiving the first dose of the vaccine.