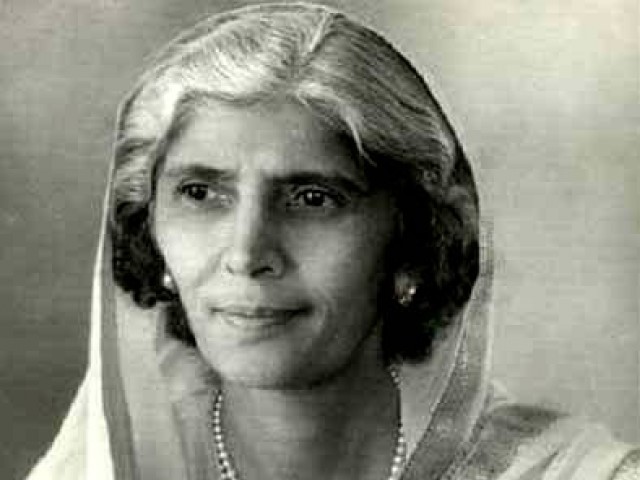 In one of my school books, I read this quote by the founder of Pakistan, Quaid-e-azam Muhammad Ali Jinnah, to his sister Fatima Jinnah: “If Fatima had not supported me in the Pakistan Movement, I would have never succeeded.”

I used to read this phrase again and again and every time I read it I was more motivated than before. For me it was not just a phrase but an acknowledgment of the talents of girls that the society was not ready to acknowledge.

The founders of Pakistan wanted to see women play an active role in national life. His sister Fatima Jinnah stood by his side in the freedom struggle. Fatima’s political training was done by her brother Muhammad Ali Jinnah. This is the reason why she actively participated in the freedom struggle as an active member of the All India Muslim League. She founded Girls Guide Movement and Pakistan Women’s Association in Pakistan. She played an active role for the struggle and survival of democracy in Pakistan. The most important example of this was Fatima Jinnah’s participation in the presidential election against the military dictator Ayyub Khan. Because of Fatima’s political power, popularity and insight, the dictator launched a systematic movement against her. Thus, the results of the elections in West Pakistan were engineered, while Fatima had won in East Pakistan.

I have already mentioned Fatima Jinnah as an example of competing to pin the other`s arm onto the surface in the national politics of Pakistan. It was great to see Asifa Bhutto, daughter of former Prime Minister Benazir Bhutto, leading a rally in Multan recently. It was as if Benazir had come back to life and stood before her, who bravely and courageously fought the battle of the execution of her father Zulfiqar Ali Bhutto and the survival of her political party in General Zia-ul-Haq ruthless rule.

Kulsoom Nawaz, who was the wife of former Prime Minister Nawaz Sharif, also stood up to another military dictator, Pervez Musharaf, and successfully ran a political movement in her husband’s absence. Her daughter is Maryam Nawaz, the vice-president of PML-N, who supported the party during the difficult period when former Prime Minister Nawaz Sharif was removed from the office and sent to jail. Locked up in jail, Maryam Nawaz Sharif was the only leader at that time who properly commanded the party.

Be it People’s Party, Muslim League-N, Awami National Party, Jamaat-e-Islami or PTI, women played a very important role in all of them.

Apart from politics, there are other places

Apart from politics, women are also significantly active in other fields. The first Vice President of Peshawar High Court Bar Association is a woman. Ayesha Malik Advocate participated in the Bar Association elections and won. Apart from this, Shakila Naz Advocate was elected Vice President of Takht Bai Bar for the first time. When I spoke to Shakila Naaz, she said that she faced many obstacles to reach this point but did not give up. Today she is representing her community by becoming a strong voice.

These are examples that must inspire women to play an important role in the society.

A woman is not less than anyone

I often think that if women have the ability to manage the house very skilfully and raise their children to be a good citizen, why can’t they use these abilities for the development of their nation.

When I see women overcoming all obstacles with courage and bravery, it reminds me that women are not the creatures that give up.

Did I say right that we are not less than anyone?