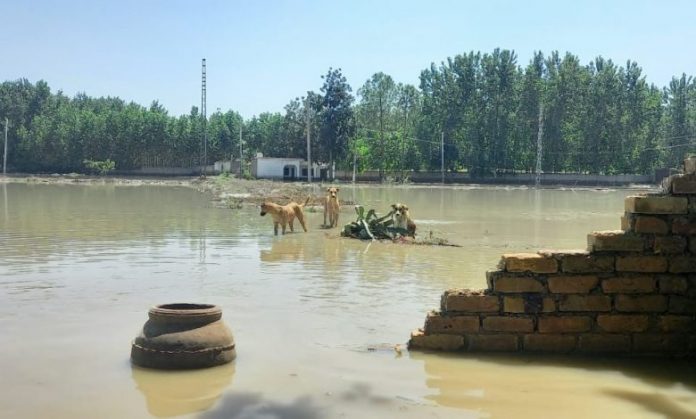 At least 250 dogs were housed in the Lucky Animal Protection Center and the floods also badly damaged the dog shelter.

However, he said that they arranged boats which rescued about 200 dogs which were later shifted to Peshawar in vehicles.

He said that the healthy dogs tried to save themselves while the water engulfed the shelter; however, those weak and sick were killed due to drowning.

“The dogs were panicked and barking loudly at humans,” he said. He said that they themselves were worried about being bitten by the canines; however, it appeared that animals were seeking help.

Lucky Animal Protection Welfare Shelter was setup Zeba Masood about four years earlier in University Town area of Peshawar; however, she had later relocated it to the Sardaryab due to lack of space and having running into trouble with other people in a residential area.

On the other hand, Ms Masood said that many dogs were still stranded in the center and they were trying to rescue them. She said that most of the rescued dogs have been shifted to Jhagra area of Peshawar, where some locals have sheltered the canine in their homes.

“We will shift the dogs once the water level recedes,” she said.

Waqar Khan, who is responsible for the taking care of the dogs, said that soon after shifting to Peshawar, the animals are not getting the food, which they used to eat at the shelter home. He said that the animals have become edgy and fighting with each other.

Besides, he said that at Sardaryab, healthy and sick animals were lodged separately and there were also vets available to treat sick and injured animals.

He said that those dogs, stranded in shelter home were in really bad shape as it was nearly impossible to take food for them.

Besides, he said that space having accommodation of shelter house staff has been washed away in water.

Similarly, some dogs were still trapped inside their cages and it was not possible to rescue them without boats.

However, he said that those animals shifted to dog shelter roof were safe and have provided with food. Mr Khan said that there were some animals still in water who were on verge of death after swimming in flood waters for many hours.