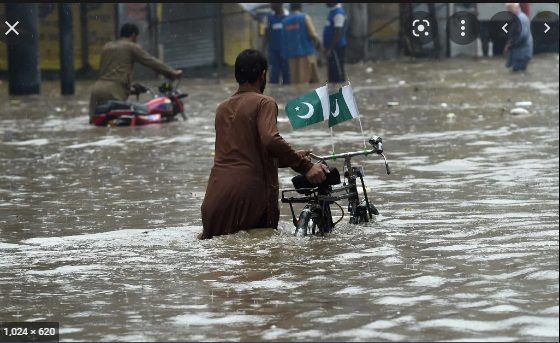 The spell of monsoon rains and resultant floods have killed 630 people and injured around 1130 others across the country, National Disaster Management Authority (NDMA) said.

Balchositan is the worst effected among the province, while in Khyber Pakhtunkhwa Tank district was also worst affected district. Pai village of Tank district lost more than 80 percent of houses were washed away in flood.

The flood struck the village on July 11 and inundated it completely which led to collapse of houses and walls. In addition to this, rain and diarrhea have also killed seven people in the village so far. Rain water again entered the affected village during the recent spell, compounding the problems of the villagers, who complained about absence of support from authorities.

Rafiq Ahmed Kundi, a Tank based reporter said that intermittent rain was hitting the city and its outskirts from Wednesday night. He said that it was causing problems for the low lying areas. In addition to this, ongoing rain over the hills of South Waziristan district was also likely to cause flooding in Tank.

Similarly, torrential downpour also hit the most parts of the Buner district. A woman was injured in when land sliding hit a house in Kulail area of the district.

Besides, rain and floods have also caused widespread damages across Chitral district and many of the Upper Chitral district parts were disconnected from Booni after the roads and bridges were washed away.

In Lower Chitral, authorities have opened Jinjiret Koh, Suwvir, Shishi Koh and Madaklasht roads; however Sonoghar village of Upper Chitral has been disconnected from rest of the district due to flooding in Miragram Gol.

On the other hand, federal minister for planning and development Ahsan Iqbal said that Pakistan was badly hit in the recent rains due to the climate change.

He said that highest number of deaths was reported from Balochistan.

Addressing a press conference in Islamabad along with Chairman NDMA Lieutenant General Akhtar Nawaz, Mr Iqbal said that the authorities were assisting with the rehabilitation of flood affected people across the country.

He said that federal and provincial governments will conduct joint surveys to assess the damages incurred in the recent floods.

Federal government has announced Rs 1 million in compensation for those killed due to rains and floods.

Chairman NDMA at this occasion said that 630 people were killed and over 1130 were injured in floods. He said that 72500 houses were also damaged due to rains and floods. Similarly, over 8700 were shifted to safe locations while affectees were also being provided rations.

General Nawaz said that dams water levels have gone up due to recent rains.

He said that authorities provided rations to 900,000 people during the monsoon spell besides setting up medial camps in the affected areas.