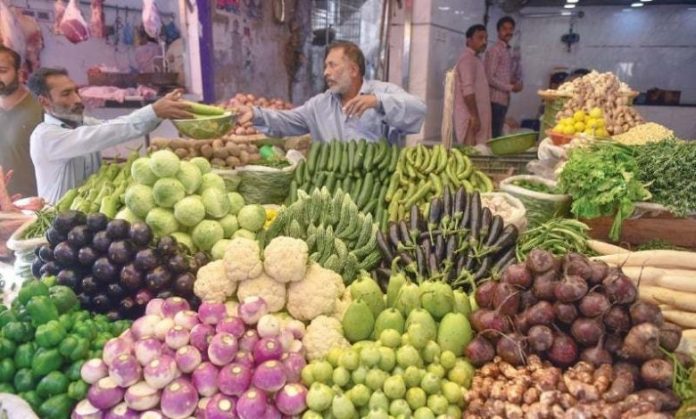 Torrential rains and floods have caused not only widespread damages and deaths across Balochistan and Khyber Pakhtunkhwa provinces but also the pushed the prices of vegetables in Peshawar sky-high.

According to reports the floods have killed about 300 people in both provinces during the current monsoon spell and 120 of them died in Balochistan during past some days.

National Disaster Management Authority (NDMA) reports have put the death toll from the current spell at more than 400 while 500 others were also injured.

Similarly, thousands were rendered homeless, while aid was reaching them as quickly as they needed.

About 32 districts out of a total of 35 have been affected due to the floods and rains in KP.

According to the authorities, the possibility of flooding will linger for two to three more weeks before subsiding.

Vegetable prices on the rise due to the floods

On the other hand, the rains and floods have also sent the vegetable prices in provincial capital skyrocketing.

Since most of the agricultural land in provincial capital has been consumed by the relentless growth of housing societies, therefore, the city now relied on vegetable supplies from Charsada, Swat and merged districts.

Since the rains and floods badly affected all these districts, therefore, the prices of vegetables in Peshawar have gone on a sky-high trajectory. Though still, some of the vegetables were still grown in outskirts of city

Swat in turn provided the supplies of tinda or Indian Squash, potato, tomatoes and other vegetables. Similarly, the Sadqiabad, Rahimyar Khan and Hayderabad were also major sources of some vegetables for the provincial capital.

Similarly gourd, okra, ridged gourd, potatoes also come from Sindh while Balochistan was the source of provision of onion and Iranian variety of tomatoes.

In this season, Peshawar mostly relied on South Punjab markets for its vegetable needs and Muzzafarghar, Multan and Dera Ghazi provided supply of ridged gourd, bottle gourd and okra while potatoes and peas from Kasur besides imported vegetables from Afghanistan.

Local traders said that most of the vegetables including potatoes, tomatoes, green chilies, bottle gourds, Indian Squash, turnips, brijals, bitter gourds, garlic, onions, ginger, cauliflower etc were available in the market; however, due to supply and demand gaps the prices were Rs 20 to Rs 40 per kilogram on higher side.

Besides, the traders also said that floods and rains have badly impacted vegetables in Punjab sending the prices of potatoes, and peas skyrocketing besides tomatoes.

Similarly, food prices in Afghanistan were going upward due to rains and floods.

In addition to this, the import of vegetables like tomatoes, potatoes and onions has also been impacted due to the floods.

Traders said that the rains have washed away roads while crops have also been destroyed in many areas, which has destabilized the market.

On the other hand, the increase in petrol and diesel prices has also made it difficult to import fruits and vegetables. The additional cost incurred on the transportation due to the fuel prices is also leading to price hikes.

Traders fear that the prices will continue to rise in Peshawar for some more days due to supply and demand gap which has arisen due to the floods and rains.