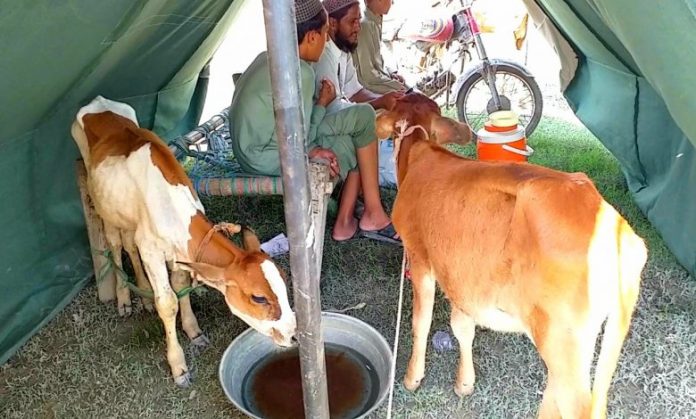 Residents of Awanabad area of Charsadda district own over 7000 cattle; however, fodder shortage resulting from flood has impacted the milk production.

Most of the area locals are farmers and engaged in dairy farming and most of the household own up to a dozen animals.

The recent floods have buried the farms which provided fodder for these animals under heavy loads of silt and earth.

Arab Gul a local told TNN that humans were getting their food; however, their cattle were without food.

Mr Gul owns more than dozen animals’ including five buffaloes and six cows for milk; however, these animals are without fodder due to destruction of farms that provided fodder for animals. He said that the unavailability of fodder was impacting milk production.

The area residents told TNN that they shifted their animals to the area graveyard, which was located at higher elevation after the floods; however, the flood has completely destroyed the fodder and greenery in the area.

They said that most of them purchase fodder and straw for their animals from Parang Bazaar; however, it has grown very costly these days.

Rohan Shah, a local said that a milking buffaloe feed price has gone up to Rs 1500 per day after the floods. A bundle of hay now costs Rs 200 while straw bag cost Rs 1500.

He said that they managed to escape with their homes with what they had on them and their cattle. “We have no means to provide fodder to our animals,” he said.

Other residents of Awanabad said that that floods have inundated the fodder crops in the area and plastered them with silt. “A buffalo which used to milk about 10 liters a day has now reduced only five liters,” they said.

On the other hand, locals who rely on dairy for livelihood take great care of the milk animals and feed them on fresh grass.

Nawab Khan, another local said that silt was also all over the fodder crop and the cattle developed diarrhea after they tried to munch on remaining bits of grass.

He said that it would take them another six months to grow fodder for their animals and till then they have to purchase it from market.

“This will drive the prices of milk up,” he said.

Professor Dr Sher Bahadur, an associate professor of veterinary science at the Agricultural University Peshawar said that flood will be catastrophic for animals.

He said that flood waters have inundated the houses and agricultural fields in the area and likely to spread animal diseases.

Mr Sher said that animals could contract several communicable diseases like diarrhea which may also result into their death.

Besides, he said absence of balanced diet may also result into low milk production. He said that animals should also be vaccinated against diseases after the floods.

Provincial government figures show that  more than 9000 animals have been killed due to the floods while animals also lacked proper feed in the flood affected areas.