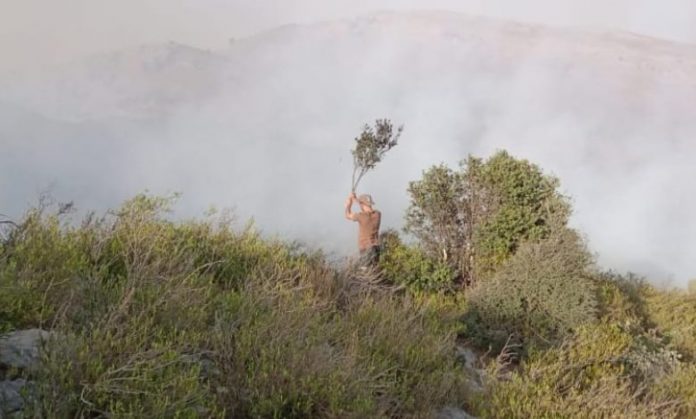 Bajaur and Orakzai districts have also reported incidents of wildfires in the footsteps of many other districts of the province over the past few weeks.

Rescue 1122 officials said that they have received a report regarding a fire on the mountains Lagharai Mamond area.

It said that its firefighters have rushed to the area after the report and started their operations.

On the other hand, sources said that firefighters put out the fire after an hour-long operation in the area. Local people and district administration officials also took part in the operation.

Rescue official said that an operation to put out the blaze was going in the mountainous area of the district for past five hours.

Earlier at the start of a lightening incident had caused a wildfire in the Koh-i-Suliman area of Dera Ismail Khan district, which later spread to rare Chilghoza forests of Sherani area of Balcohistan. The ferocious blaze besides gutting the famed chilghoza forests of the area also killed three people and injured several others.

Baluchistan government while failing take appropriate action to overcome the blaze; however, blamed the KP government of failing to alert them about the fire.

Baluchistan government also did not pay attention to the entreaties of local officials Sherani and other areas for providing resources to overcome the fire.

However, it was only after about 10 days later when the blaze neared the human settlements, the provincial government woke up to the disaster.

Baluchistan Chief Minister Abdul Qadus Bizanjo told a presser in Zhob that Iran had provided a firefighting plane to combat the blaze.

In addition to this, he also announced Rs 1 million compensation for those who lost their lives in the blaze and Rs 500,000 for the injured.

It is worth mentioning that these forests produced up to 675 tons of chilghoza every year costing about Rs 2.6 billion.

After this, four members of family were killed in six separate incidents of wildfire in different parts of KP.

Rescue officials said that four members of a family were killed while collecting firewood in mountains of Chakesar area of Shangla district.

On the other hand, more than 200 incidents of forest fires have destroyed forests and pasture spread over an area of 14,430 acres of land in different parts of the province.

A forest department report stated that at least 55 of these wildfires were started deliberately. In addition to this, 12 others were caused due to dry weather and reasons could be not ascertained for 143 remaining incidents.