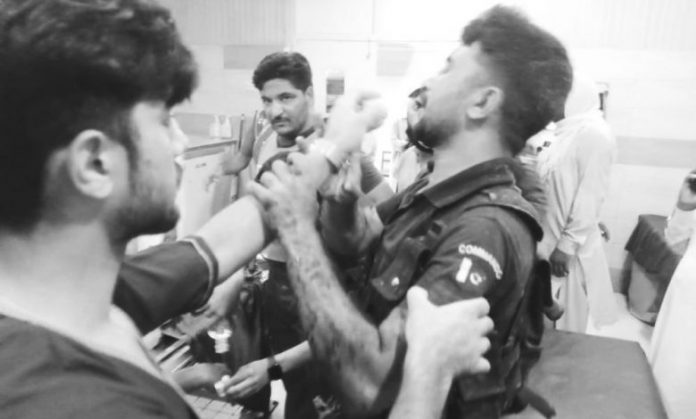 Four policemen were injured when unidentified attackers opened fire on a polio team in the Mathray Akakhel area of Tirah police station of Khyber district on Thursday, police said.

Sources indentified the injured as Abdullah, Fazal Qadeer, Bakhteen and Lal Kalam and they have shifted to Peshawar for treatment.

However, the polio workers remained unhurt in the attack.

The polio team was inoculating the children of parents who were refusing to vaccinate their children.

It is worth mentioning here that the on June 28, a polio team had came under attack in North Waziristan district on the second day of the polio campaign.

The attack left a polio worker and two cops dead while a child was also wounded.
On the other hand, Pakistan has reported 12 polio cases during the current year so far and all the cases have been reported from the North Waziristan district.

According to health officials, all these children were either missed during the polio campaign or their parents were refusing to inoculate their children.

Separately, a proclaimed offender was shot dead in an encounter with police Sardheri area of Charsadda district.

A Charsadda police statement issued here said that the PO identified as Azhar Ali opened fire on police soon after he saw the raiding party.

However, he was killed in the exchange of fire which lasted nearly 15 minutes.

According to police, the accused was involved in the killing of policeman and snatching his official weapons. Besides, he was also wanted in 14 cases of kidnapping for ransom, murder and attempted murders.

Police said that a search operation was underway in the area for arresting the PO other accomplices.

DPO Charsadda Sohail Khalid in a statement said that police would continue its action against anti-social and criminals.