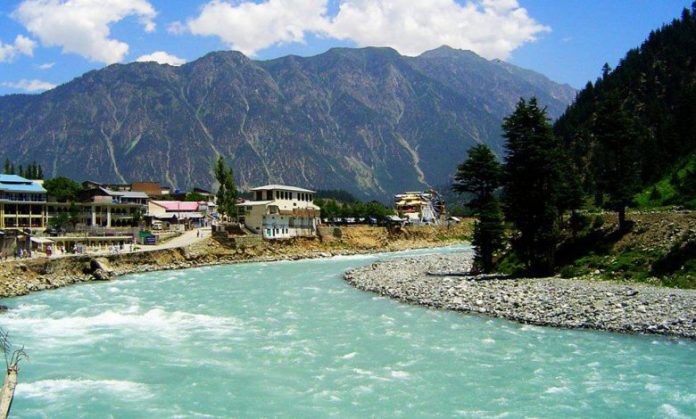 It was late into the night when we arrived at the Honeymoon Hotel in Swat. Built in 1984, this 164 room hotel was equipped with all amenities and lodging of choice for those visiting Swat.

The next day, we sat outside to have breakfast while listening to gurgling of River Swat in the cool breeze. We left in jeeps for Mahodund Lake and kept snapping pictures all along the way to capture the beautiful scenes.

We returned to Honeymoon Hotel after spending a night in Mahodund and it was a sight to behold in the daylight. After shopping in Kalam Bazaar, when we started to take pictures on the banks of river next to the hotel new block, our driver, asked us to be a bit cautious. “This is such a blood thirsty river and several couples have drowned into it,” he said.

He said that sometimes back, a visitor family from Punjab was taking photographers, when one of their girls slipped into the river and drowned. Similarly, a vehicle plunged into River Swat about three months back and those travelling in it were also killed.

River Swat is also known as Swat Sind and it originates Oshu and Sangram streams and later passes through Kalam. The river is about 240 kilometers long it falls into River Kabul near Charsadda.

Swat which in the olden days was known as Oddiyana, which was later changed to Swastu. Even today Swat is famous tourist spots due to the scenic beauty

However, the sudden collapse of Honeymoon Hotel left ones wondering how such a structure could simply come down crashing. I asked the one of the hotels staffer that what would happen to the hotel in case of flooding.

He replied that they have constructed a safety wall around the hotel, which will protect the building. Mr Amjad also said that they were also asking government for a no objection certificate, which has not been approved.

Honeymoon hotels new block collapsed in the recent floods and 38 of its rooms were destroyed. The hotel lost 25 percent of its space due to the floods.

The owner has suffered losses worth several millions; however, there were no loss of lives as the hotel was evacuated well in time fearing a flood. Locals had taken tourists to their homes for stay as they could not have left the area due to the roads closure.

Now after seeing the videos of hotel building collapsing so suddenly, my mind veers to the its beauty and tranquilly, however, I also feel that the owners might have realized mistakes they have made while constructing such structures.