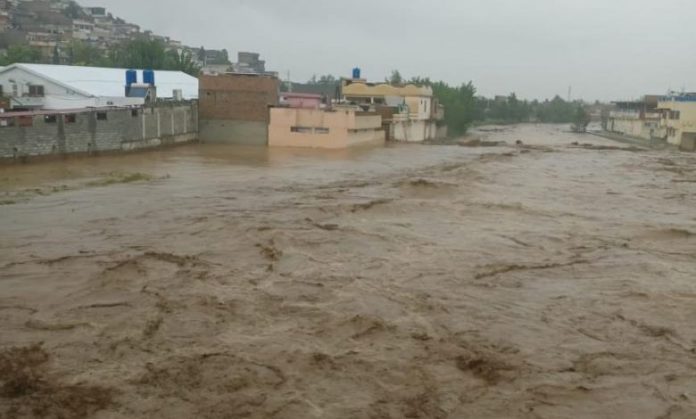 A minor girl was washed away in flood in Mingora as heavy downpour hit the Swat’s district headquarters on Wednesday.

The minor body belonged to Landai Kas area and her body was later recovered for Odegram. On the other hand, rain water entered houses and shops in Marghazur Town, Bangaldesh, Faizabad and Makan Bagh areas of the city, trapping large number of women and children. Rescue 1122 and other organizations shifted the trapped persons to safer places.

Rescue 1122 spokesperson Shafiqa Gul said that a wall collapse incident took place in Landai Kas area where rescue operation was currently in progress. She said that rescuers were engaged in relief activities in several areas of the district.

In addition to this, she said that all the rescue stations of the districts were on high alert to tackle any emergency.

Ms Gul said that the urban flooding also led to the closure of the Saidu Sharif-Mingora Road for traffic, causing immense problems for the public. The flood also washed away trees, electricity pylon, transformers and motor cars as well.  Besides, the rain water which submerged the houses in the area also damaged furniture and other valuables as well.

Besides, he said that all the shops in the market were also badly hit by the flood and the traders themselves were busy in clearing operations as government agencies failed to arrive at the scene.

On the other hand, five school children were reportedly washed away in flood in Shaltu area of Barawal tehsil of Upper District. The children are said to be primary school students. Rescue sources said that two they were still searching for two of the bodies.

Mr Khan also directed for cancelling leaves of rescue and administration officials and people living in low lying areas should be shifted to safer places.

He also directed for taking all possible steps for reducing loss of lives and other damages and ensuring dewatering of flooded areas.

Commissioner Malakand division Shaukat Ali Yousfzai also directed the districts administrations of the region to remain vigilant in the face of floods and rains. He said that rescue teams and machinery should be kept on high alert due to the situation.
Pakistan Met department has also predicted more rains till August 26 and Provincial Disaster Management Authority has also alerted district administrations regarding more rains.