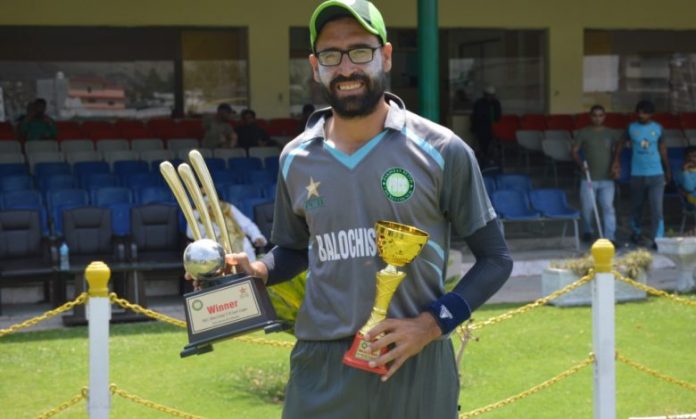 Mohsin Khan, a blind cricketer from Mohmand district, was unable to make it in Fata hardball trials in 2013 due to his eyesight issue. In the meanwhile, Mr Khan came into contact with blind cricketers Shabbir Ahmed and Nasruallh who took him to trials for blind cricket. Mr Khan was selected into blind cricket and has playing cricket since then.

Mr Khan hailing from Kuz Kandaw area of Mohmand said that he played blind domestic cricket in 2013-14.  In 2015, he was selected for Pakistan’s blind cricket team in their Sri Lankan counterparts visit to the country.  Besides, he also played in 2016’s Asia Cup, which took place in India.

Mr Khan said he has been selected for Pakistan blind team in the upcoming South Africa tour, scheduled for February. Besides, he said that will also participate in India, New Zealand and Pakistan tri-nation series scheduled for March this year.

On the other hand, Mr Khan is also skipper of the KP Blind Cricket Team and an all rounder for the national team. He is fast bowler as well as an opening batsman. He has also visited the Sri Lanka, Bangladesh, UAE, India and South Africa.

He said that he had taken seven wickets in two matches against in series against Sri Lanka. However, added that his most memorable performance was against the archrival India, when he scored 37 off 24 balls in Dubai. “I will never forget this performance against India,” he said.

Besides, he said that in 2017, Pakistan set a record of scoring 427 runs against West India and his contribution to the tally were 113 runs.

I have represented Pakistan in more than 100 one day international matches and T20 Internationals.

Mr Khan, 25, is married and father of a girl. He is running a mobile phone shop in his native village and is facing financial problems.

He had studied till middle and is unable to land on job due to the education. His father is a taxi driver, while Mr Khan runs a mobile phone shop.

Mr Khan said that blind cricket has its own council which the Pakistan Cricket Board funds. The players are awarded six months contract and are paid Rs 12,000 a month. “This amount is just peanuts in today’s hyperinflation,” he said. “I am hopeful for bright future prospects of blind cricketers,” he said.

Besides, Mr Khan asked the government and PCB to give them the same privileges as regular team as the blind team has also won several international events.

Regarding blind cricketers woes, he said that at one hand they were not given the proper privileges and facilities while on the other hand, they have no lack employment opportunities as well.

“We even have to pay the rent from pocket when going for cricketing events,” he added.