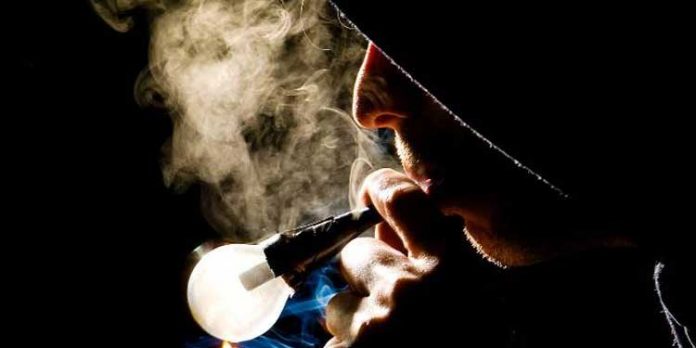 The ice or Methamphetamine addiction in Bajaur district has touched alarming portion.

TNN has spoken to local police and social activists regarding the growing incidence of ice addiction.

A police officer requesting anonymity told TNN that most of the drugs in the district made their way from Afghanistan. He said that police has also setup a narcotics eradication team in the district which acts against drugs on intelligence basis.

Police source said that in many of the cases, accused on charges of drugs go scot free from courts. He said that Khasadar force personnel who have been inducted into KP police after merger were not trained. He said that even many of the SHO were also untrained and FIRs thus registered contained many issues, which benefited the accused at the end.

Besides, other sources claimed that some elements of local police were in cahoots with the drug paddlers and smugglers and provided information to them about impending operations and raids, leading to their change of places.

However, District Police Officer Bajaur Abdul Samad Khan when approached for comments said that police was actively engaged against drugs in the district.

He said that police was also working in coordination with local elders and social activists to control the drugs menace.

Aleem Khan, a local Methamphetamine addict told TNN that he fell into the drug trap due to his company.

“I used to work as laborer in Khar market and started using ice with some of people I used to sit with here,” he said.

He demanded the government to help rid him of ice addiction.

TNN was unable to contact social welfare department on this issue.

Rehan Zeb Khan, a social activist and chief of Youth of Bajaur organization said that there was no rehabilitation center for the Methamphetamine addicts in the district.

Mr Khan said that drug addicts from the districts were sent to rehab centers of Dir and Peshawar for treatment.

He said that there used to 15 ice addicts in Bajaur some two years back; however, now their number in Khar bazaar alone have surged to over 250.

He said that they have spoken to district administration and police in this regard on many times and police had assigned them the task of identification of drug paddlers.

Awami National Party (ANP) Bajaur general secretary Nisar Baz Khan said they were setting up taskforce against drug addictions in different areas of the district which would be turned into district taskforce later.

He said that drug addiction was district’s joint issue.

“Police has completely failed to control drug addiction in Bajaur,” he said.

He said that ANP was preparing for staging a sit-in against drug addiction in Khar. “Drugs were more dangerous than the explosives,” he said.

The drug addiction is also leading to surge in the district.

Locals said that in the past snatching of mobiles, purses and muggings were rare; however, these days’ streets crimes were on the rise.