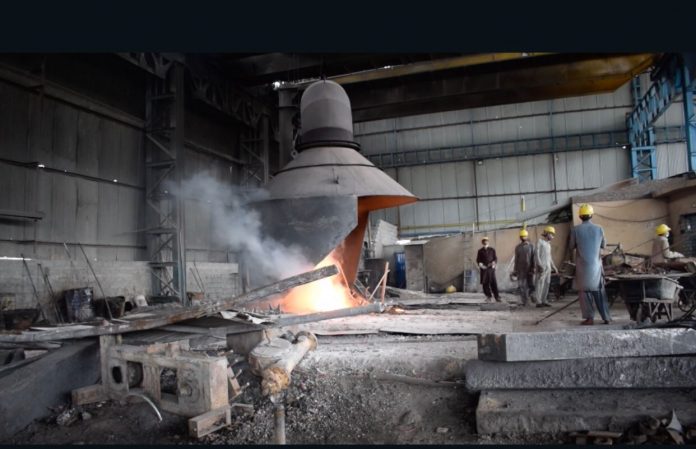 In addition to this, plywood industry installed in a very built-up zone, emitting heavy dust particles is also a source of a headache for the locals who have staged many protests against the industry. The major reason behind this much industry installation in the area is that Malakand being a tax-free zone; therefore, industrialists prefer to install their industries there for to avoid taxation.

The worsening environmental condition is forcing many ailing residents to consider moving from the area. Abdul Qudoos, 55, a resident of Mehrday village, said that he and some of his family members have developed heart problems since these steel mills started operating in the area, producing tons of toxic waste without any check and balance. “We are advised by our doctor to migrate from this area as we are continuously inhaling this smoke that causes heart disease and dyspnea.”

It’s not an easy decision to leave the area for someone who has lived all his life at the same place, “why would we leave this place, we and our ancestors have lived here, we have our properties, we are not going anywhere,” Mr Qadoos reacts angrily to the calls for migrating from their place

Syed Jamal Shah, general secretary of Insaf Labor wing from district Malakand, who owns a property adjacent to a steel mill, is known for his activism and campaign against the illegal installation of industries inside the residential zones.

“I found this steel mill installed inside the population zone and there was a huge emission of hazardous smoke causing different diseases in the area, and the people were doing nothing but suffering,” Shah said.

“The Director General EPA showed us around twenty letters addressing the DC to stop operation of the steel mills as they are running without the permission of the agency, but no action was taken against them,” he said.

According to the estimate by locals of Dargai, a single steel mill has 2000 of population in its surrounding while in a two kilometers square it effects 50000 of population from its smoke and noise but EPA has allowed some of the steel mills to run after installing a machinery that sucks all the smoke and dust particles inside but the noise is still a problem.

Requesting anonymity, a senior citizen blamed the mill owners for fueling protests against the imposition of taxes in Malakand District by doling out money to the union presidents of Sakhakot, Dargai, Butkhela and Mingora Bazaar.  He said that they want to avoid taxes and other royalties by placing their industries here in Malakand district. “These are like offshore companies in Malakand,” the citizen told.

Some industrialists were contacted to know their version for this story.  Muhammad Shoaib Shah, the director of AW Group of Industries and the owner of a steel mill, which does not have NOC at the moment, said that they have a proper waste management system in place in tehsil Dargai Malakand.

He said that he has been also running a Ghee mill here in Malakand for a decade but no such issue was raised before. About the case filed against his steel mill in Peshawar High Court, he said that he was waiting for the court’s decision and whatever the decision would be, he would follow it.

Some industry owners also mentioned the weighty bureaucratic process for getting NOC from the government. Aziz Ahmad, a resident of Sakhakot, tehsil Dargai of Malakand and owner of a steel mill told that when he applied for NOC, then the DC referred him to get NOCs from ten to twelve departments and he went through this process. “I belong to this area and I know the worse effects of steel industry waste so I installed the pollution control plant in my industry. The EPA officials inspected my industry and pollution management plant and found it okay, issuing me the operational NOC,” the owner concluded his tale of getting NOC.

He added that the industrialists have to provide the monthly report to the Industrial Development Officer in EPA and they can also demand the CCTV footage installed in the waste management plants anytime.”

He explained that the major interest for industrialists in Malakand is that it was tax-free zone but it also provides employability to the local people.

Dr Kachkol Khan, Medical Superintendent at Tehsil Headquarter Hospital Dargai told that industrialization contributes pollution to natural climate and causes chest and liver diseases. Moreover a big number of local populations are suffering from skin and chest related issues due to the pollution in the air. Children and old age people suffer more due to this pollution.

“We are receiving asthma and skin diseases patients from the areas where there are industries. As we noticed that the number of patients suffering from chest diseases is increasing day by day which ultimately leads them to heart failure. So, we advise them to get shifted from the area or the steel mills should be closed,” the doctor said.

Dr Khan maintained that smoke particles not only cause air pollution but it comes down with the rain water and gets mixed with water resources of the area. “This water pollution causes not only stomach diseases but also skin related issues when people receive rain drops directly on their skin.  He further told that the people living around are suffering from psychological disorders as their sleep is disturbed by noise pollution.

Shah Wazir, a local elder aged 80 years told that he is suffering from skin disease due to pollution in their area. His skin is itchy, and sometime started bleeding. He told that he went to Islamabad and such other areas for the treatment of his skin related issue but all in vain. Doctors told him that his symptoms of his skin issue could be minimized but his disease is untreatable.

Under the Khyber Pakhtunkhwa Environment Protection Act 2014, EPA may investigate any environmental or pollution issue and can seal, or seize the attachment, holding, property, machinery, equipment or material involved in commission pollution offences or take into possession in a prescribed manner. The act was extended to Malakand in October 2016 but due to lack of awareness and complaint lodging mechanism by the EPA, the locals are still striving for a platform like EPA to register their concerns about environmental issues.

Pleading anonymity, a senior official at EPA told that it is illegal to run any industry inside the built-up zone, under the 2014 Environment Protection Act such industries should be shut and shifted to another suitable place.

Replying to a question asked about no objection certificates issued by the district administration to steel mills Rehan Khattak, the DC Malakand, explained that when Khyber Pakhtunkhwa Environment Protection Act 2014 was promulgated then the previous act was repealed but unfortunately the new act of 2014 was not extended to Malakand which was a part of provincially administered tribal area (PATA). Thus, Malakand was ungoverned in terms of Environment Protection till October 2016, he added.

“The trick was that when these steel mills were seeking NOC there was no environment protection law extended to Malakand and they were given permission to run their industries,” the DC said. When the DC was asked that why district administration allowed the industries to be set up inside population zones he simply replied that it was his predecessor’s decision and he couldn’t comment on it.