Home News International recognition not in sight for Taliban even after a year in...
Facebook
Twitter
WhatsApp
Linkedin
Email 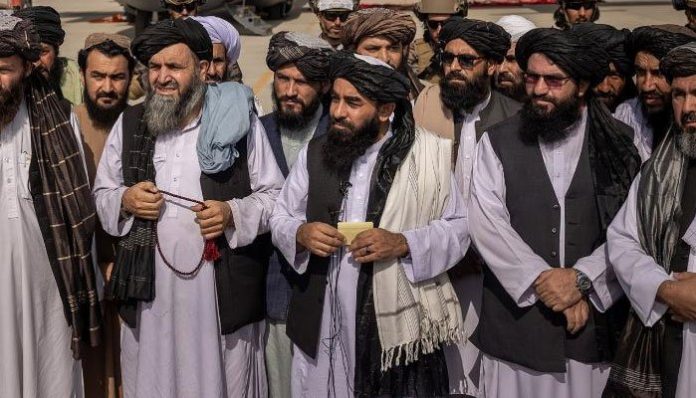 August 15th marks one year for the Taliban government in Kabul; however, the regime has not been officially recognized by a single country so far.

Taliban did not face any resistance as they swept through the war torn country after the departure of US and NATO forces from Afghanistan under the Doha Accord. Following the abrupt departure of Afghan President Ashraf Ghani, Taliban took over Kabul without any fighting exactly a year ago.

Senior journalist Haroon Rashid, who covered the signing of the Doha Accord, said that the most important point both sides agreed on was that the Afghan soil would not be used against any country. Besides, he said that it was also agreed that terrorist organization would not be allowed to operate from Afghan soil.

Mr Rashid said that after the recent killing of Al Qaeda chief Ayman al-Zawahari in Kabul in a US drone strike, Americans have accused the Taliban of violating the Doha agreement.

On the other hand, he said that the Taliban have been refusing to acknowledge the presence of Al Qaeda chief in Kabul and the Taliban are also accusing the US of violating the deal.

In addition to this, he said that even a year after Taliab took power, Afghan girls were not allowed to sit in school beyond primary school.

“This was also a source of friction between the Taliban and America,” he said.

On the other hand, Afghan Taliban spokesperson Zabihullah Mujahid said that for the first time their government presented a budget with the country’s own resources.

In addition to this, he said that in the past about 100 people were killed in clashes across the country on a daily basis, which was not the case anymore. “Peace has been established in Afghanistan,” he said.

However, the single biggest issue confronting the Taliban is economic turmoil plaguing the war torn country. Afghanistan is currently cut-off from the global banking system.

In contrast to this, the Afghan republic was a recipient of US economic aid. However, soon after the Taliban takeover of Afghanistan, the US had frozen Afghan assets amounting to US $ 9 billion.

Tahir Khan, a senior Afghan affairs expert, told TNN that the Taliban government was facing external and internal challenges even a year after coming into power.

“Taliban took over Kabul at gunpoint and not through dialogue or a political solution which is the main reason for their current issues,” he said.

Mr Khan said that the Taliban were of the view that they had to take over Kabul to fill the vacuum created by the sudden departure of the Afghan president.

He said that lack of global recognition of the Taliban government was also exacerbating its economic challenges.

“In the past, the Afghan economy was run on dollars from abroad which has stopped since the fall of Kabul and Taliban have no resources to run the country smoothly,” he said.

Similarly, the Taliban’s first year in power proved too tough for the media and journalists. Mr Khan said that though the Taliban deny any restrictions on media; however, the majority of Afghan journalists have left their country. Besides, Afghanistan’s severance from the global banking system has also badly hit the economy.

He said that on the other hand, the international community was demanding Taliban to form a broad based and inclusive government, having representation of all sides.

However, the Taliban were not ready for such an arrangement, he said.

In addition to this, female education has been shut down for a year, and the Taliban are blaming lack of financial resources for the closure.

Similarly, Taliban forces have also clashed with their neighboring countries on borders.

The Taliban government will face more problems in future and it would be difficult for them to run the system smoothly, he said.

Mr Khan said that if the economic turmoil continues, Taliban problems increase manifold. “Taliban should form an inclusive government to overcome the worsening situation,” he said.

Mushtaq Yousafzai, a senior Peshawar based journalist said that he never imagined that the US will leave Afghanistan abruptly or Ashraf Ghani will flee.

“In Afghanistan history, no one has left power without much bloodshed,” he said.

He said that Taliban took over Kabul in the US presence without any bloodshed which was major even to this century.

Mr Yousafzai said that the Taliban government was in transition and even they themselves were calling their government as acting or interim setup.

However, he said that Taliban were still facing issues and despite that Taliban chief Haibatullah Akhundzada announced general amnesty. Mr Yousafzai said that incident of targeted killings started after the amnesty announcement and there were reports of torturing of former government employees and military personnel.

“Taliban chief had to issue warning to those violating the general amnesty,” he said.

However, he said that if Taliban remained united, made appointments on merit and having beard and being a Taliban is not made mandatory, then, the regime can progress.

Mr Yousafzai said that despite the presence of Al Qaeda, Chinese, Uzbek and Pakistan militants, none of the countries have complained about Afghan soil being used against them and this was a major success for Taliban.

However, he said that many countries wanted to see the Taliban regime becoming weaker.

He said that economy and internal security were major challenges for the Afghan Taliban. Daesh was present in Afghanistan as a security threat and Taliban have to overcome this threat, he said.

Taliban and the US had signed the Doha Accord in February 2022, wherein both sides had agreed on withdrawal of coalition troops from Afghanistan, formation of government in the country and women rights.