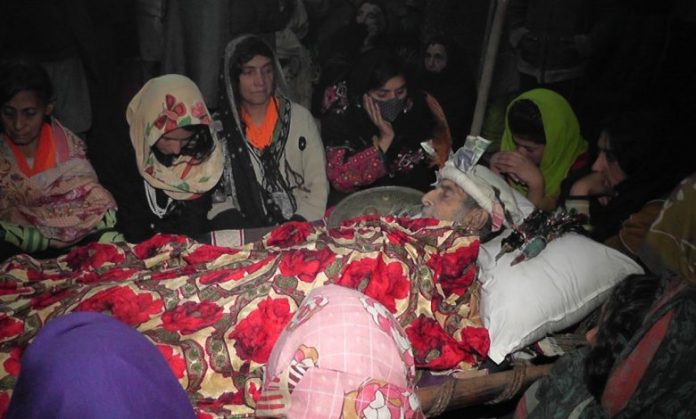 Adeena was the senior most among Kalash priests and had also served Rambur valley’s chief qazi.

In his funeral rites, Birir valley’s chief qazi Mir Bacha Kalash praised the service of Adeena in Jastakan for about 30 minutes. It was followed by visit form both Kalash males and females to the Jastakan to pay their homage to the deceased priest.

Some foreigners also visited the Kalash valley to witness the funeral rites of Kalash tribesmen.

It is worth mentioning here that the Kalash priest or shamans are known as qazis and the tribe has also a chief qazi as well. Besides, women can also appointed qazis.

Kalash pagans mourn the death of a male for three days while woman death for one or two days.

Sachan Gul, a Kalash female qazi spoke to TNN about their final rites rituals and said that after deaths they inform their relatives and acquantainces in all three valleys of Bumburet, Rambur and Birir.

She said that they slaughter up to 100 goats as offering on the death of their relatives; however, the slaughtering is done by their Muslim neighbors as they do not consume meat slaughtered in line with Sharia.

Ms Gul said that an animal slaughtered by Muslim could be consumed by anonye.

She said that cooking the meat, they invite all the relatives for the feast and afterwards prayers are offered for the dead.

Ms Gul said that they respect all religious besides loving their own faith. “We sent away our death on their afterlife with happiness,” she said.

In Kalash final rites, a dead is placed on a cot and red or white flag is erected besides bedside. Cap of the dead is adorned with currency notes of different denominations while dry and fresh fruits as well as cigarettes and naswar also placed besides bedside.

Kalash shamans from all three valleys visit the dead and praise him or her while standing besides the cot and in exaggerate in describing deceased good deed. The male play drums while female dance and sign religious hymns.

Guests are offered feast of desi ghee, cheese and meat for three consecutive days and the dead body leaves the Jastakan after three days. Shots are fired in the air while taking a male body away from Jastakan.

A priest with a flag walks ahead of the cot containing the remains of the dead and leads to burial ground, where the deceased is laid to rest. In the past, Kalash used to leave their dead in wooden boxes in a forest; however, later started to bury them due to decomposition.

In the past, a shot gun and other items of daily use were also placed in their graves; however, gun is no more placed these days. The cot on which the dead is carried to the grave is placed over the grave in inverted shape while the mourners return to their homes.

The mourners wash their hand at nearby stream and went to deceased home where they are offered a feast along with a locally brewed wine.

Abdul Latif, a social activist said that the Kalash burial rites existed in their centuries old unadulterated condition and were know all over the world.

He said a large number of tourists were also visiting Chitral to witness these rites.

Mr Latif said that a large number of Muslim also visit their Kalash neighbors to offer their condolences.

A special soup made of meat and flour and known as Josh is offered to the mourners and females’ visitors also take this soup to their homes. Similarly, cigarettes and naswars are also distributed among the mourners.

Slaughter of more goats is considered as a source of prestige among the Kalash.

In Rambur valley, when a Muslim arrives at the Kalash funeral a shot is fired into the air after which a the visitor can proceed to Jastakan.