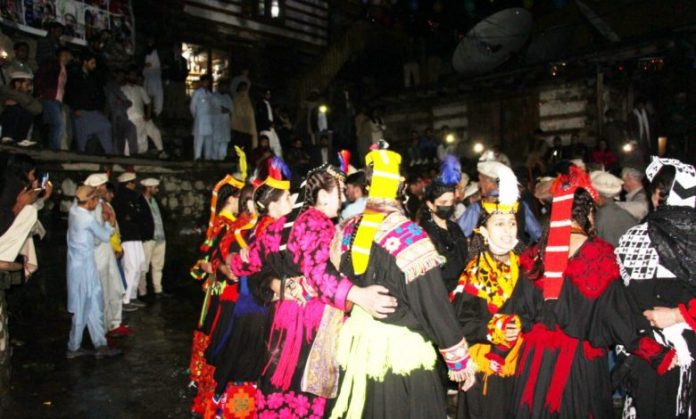 Kalash community of Chitral district with great fanfare celebrated its traditional Uchal festival to mark the return of shepherds from the high altitude pastures to their villages.

The festival also coincides with the plucking of ripened grapes, which are then turned into wine. At this occasion, Kalash people consume dairy products like milk, cottage cheese, cream and also share them with relatives.

The three days festivals starts at Rambur valley and concluded at Bumburet valley. In addition to this, Kalash celebrations are also observed in Birir valley as well; however, few tourists venture there due to the difficult access roads.

Despite ongoing rain spell, a large number of tourists visited the Kalash valleys to attend the festival. For the first time, this year, Khyber Pakhtunkhwa government financially aided the Kalash community in observing the festival.

This year, KP Minority Affairs department gave Rs 300,000 to chief Kalash Qazi to celebrate the festival in all three valleys.

In addition to this, Rs 50,000 each were given to seven other religious leaders who have been appointed recently.  The department also distributed financial aid among orphans as well as 550 other locals was given Rs 4800 each.

In addition to this, a large number of foreign tourists also attended the festival celebrations and appreciated peace of the area.

Shushmita, a Kalash student thanked the guests for attending the festival and said that there was no truth in social media posts spread by unscrupulous people regarding Kalash women.

She said that Kalash were very hospitable people and take visitors to their homes to entertain them, which some people color to badmouth the community.

On the other hand, Syed Gul Kalash briefed the visitors about festival and asked the people to visit the valleys and take part in the celebrations while being aware of local sensitivities.

A Christian psychologist said that she was impressed with area color and beauty and will visit it again.

A large number of tourists attended the nightlong festivities of the uchal festival despite rain and cold.