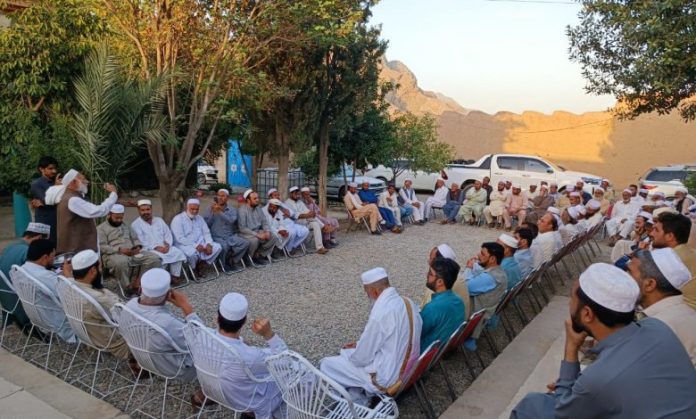 Landikotal Qaumi Jirga has demanded the lifting of ban on import of cattle from Afghanistan.

The jirga also demanded softening of border policy at the Torkham crossing.

It said that if the exploitation of locals was not stopped, then, they would be forced to shut down all trade activities at the border crossing.

The jirga discussed the government on imports from Afghanistan at Torkham.

Besides, it also formed a 22 members committee to resolve the issue after negotiations with the relevant authorities.

JI Landikotal general secretary Murad Hussain said that Khyber people were subjected to discrimination by the authorities. However, he said that they were ready for talks.

Mr Hussain said that besides forces, Customs, Federal Board and Revenue and National Logistic Cell have banned import of fat-tailed sheep at Tokham.

However, he said that there was no ban from government on import of fat-tailed sheep or other imports.

Besides, he said that at the same time import of coal, marble and other things from Afghanistan was going as per routine.

Mr Hussain said that most of Lanidkotal residents were dependent on trade activities at Torkham crossing; therefore, they should not be deprived of business in this age of spiraling inflation.

It is worth mentioning here that authorities have clamping down on imports at the Torkham. However, authorities are not allowing import of fat-tailed sheep despite depositing custom charges.

On the other hand, it has become nearly impossible for locals to go to the Torkham crossing. In addition to this, Afghan require invitations to visit Pakistan.

The elders said that about four years ago, the then KP governor Shah Farman had promised transit passes for locals; however, those promises are still unfulfilled

QWP Khyber chairman Zakir Hussain Afridi said that authorities have stopped the illegal movement through fencing of the border.

However, he said that relevant authorities were creating problems locals and if this continued then they will forced to shut down the trade at the crossing.

The jirga constituted a committee headed by the tehsil chairman Khalid Shah Shinwari to hold talks with the relevant authorities.

Khalid Shah Shinwari said that import of the fat-tailed sheep from Afghanistan was not something illegal as Torkham was international border. However, he said that all laws were being trampled here.

Mr Shinwari said that people on both sides o border were related to each other; however, they were being ridiculed at the border.

He said that maltreatment of people at the border was earning a bad name for government departments and the country.

Mr Shinwari said that if this issue was not resolved through talks, then they will be forced to agitate the issue. “We will close the Pak-Afghan Highway and shut down trade activities at the border,” he said.

The elders said that ban on import of fat-tailed sheep was not only damaging trade activities but at the same time locals were facing problems in performing Islamic ritual of animal sacrifice on Ediul Azha.