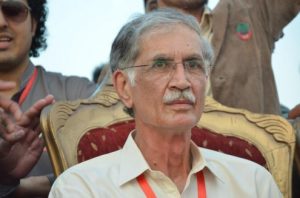 NOWSHERA, July 14: The Khyber Pakhtunkhwa government has announced to stage protest against electricity outages in the provincial capital Peshawar.

Addressing a rally in Nowshera district on 13 July, the Chief Minister, Mr Pervez Khattak, said those facing problems due to the outages should gather at the Army Stadium in Peshawar for a protest rally on 16 July.

Electricity shortfall has reached 7,000 megawatts in the country and there is 12 hours loadshedding in urban areas and 14 hours in rural areas nowadays.

According to media reports, the prime minister has also taken notice of massive loadshedding during the fasting month of Ramazan and asked the authorities to submit a report to him over the issue.