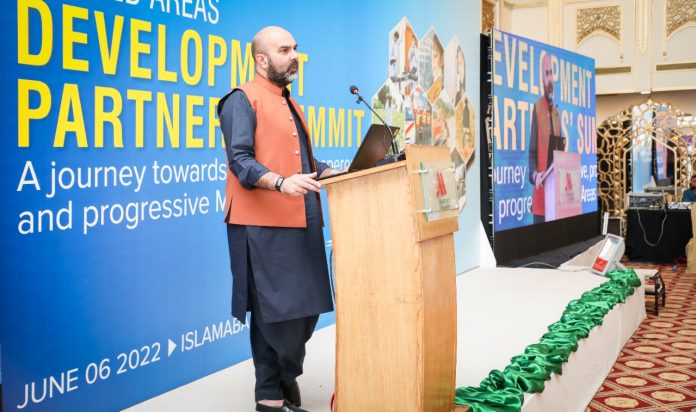 Khyber Pakhtunkhwa government  announced details of its most ambitious interventions in the merged areas with the launch of the second phase of the Accelerated Implementation Programme (AIP) set to chart the course of development in the region for the next three years.

The KP government announced it wanted to be bolder in solving the challenges of the underdeveloped region to bring it at par with the rest of KP by presenting its vision to do so at the Merged Areas Development Partners’ Summit organized by Planning and Development department, KP in Islamabad.

KP Finance Minister Taimur Khan Jhagra opened the session by describing the journey and challenges the government faced since the merger of former FATA with KP. He said, “KP has had little fiscal space but we still overcame the shortfalls in funding for merged areas with our own resources despite an annual shortfall of more than Rs 70 billion. We are committed to the region for the long run, and will weather any financial or security challenges to make good on our promises.”

At the event, KP Additional Chief Secretary (ACS) Shahab Ali Shah presented a detailed presentation on AIP II, which has been designed with the input of the people of MA and sector experts with international standing. AIP II would build on the gains in health, infrastructure, agriculture, education and other sectors already delivered on.

Knut Ostby, Resident Representative UNDP Pakistan, spoke via teleconference from Norway, and congratulated the government for the work done and progress made in merged areas since the merger. He expressed hope that the innovations, solutions lab and Special Emphasis Programmes in AIP II would continue to foster a culture of context-specific solutions that are data-driven.

Kamran Bangash, KP Minister for Higher Education, recalled how he implemented the provision of transport for students and started bachelor’s degree programs in the region.
KP Minister for Labour and Culture Shaukat Ali Yousafzai expressed gratitude to the development partners assistant the provincial government with transforming lives of people of the region

At the event, the ACS shared the provincial government is working on a mechanism to coordinate with the development partners in high-level meetings and technical working groups to ensure every cent of their donation makes the most impact in the lives of the people of merged areas.