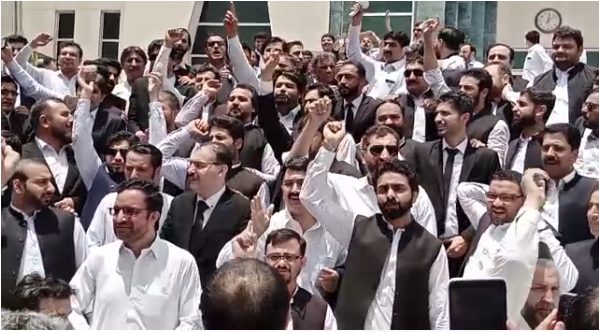 A large number of citizens rushed to petrol pumps late on last Thursday when federal government announced to raise the petroleum products.

A Supreme Court lawyer Syed Ghufranullah Shah was also among those who rushed out of his home to fill fuel tank. Advocate Shah had an encounter with Additional Assistant Commissioner Peshawar Cantt Aftab Ahmed at the petrol pump.

What really happened between the lawyer and the AAC at the petrol pump is not year clear; however, the security detail of the officer manhandled the lawyer and took him into custody. Later the district administration also registered an FIR against the lawyer for interfering in a government official’s duties. However, a mobile video filmed by a local changed the situation.

Soon afterwards, lawyer announced a strike against the torturing of a lawyer.

Peshawar district administration initially kept a mum over the issue. However, on Saturday, lawyers during its protest stormed the nearby Deputy Commissioner Peshawar, tearing its gate apart.

Some of the saner elements among the lawyers controlled the situation.

On the same day, provincial and federal bureaucracy joined hands and gave a call for the province wide strike on Monday. Bureaucracy was also joined other associations of government employees.

On the other hand, lawyers also extended their strike and KP Bar Council and Peshawar High Court Bar Association also announced a strike till June 7.

After its one day protest, bureaucracy announced a token strike by wearing black armbands. However, they have also announced to announce their next course of action after reviewing the situation on Thursday.

He said that they had also contacted the lawyers for a transparent probe; however, the other side wanted the dismissal of the officer from service, which has not possible in law.

Mr Mehsud said that government employees interact with public on daily basis; however, such a situation where even the DC Peshawar office was attacked made it difficult for them to perform their duties.

“Government should provide legal and physical protection to government employees,” he said.

However, he said that they have offered the resolve the issue through a jirga.

Rehmanullah Advocate, president PHCBA said that lawyers have not attacked the DC office. He said that if someone has got any proof regarding lawyer attacking the office, they should share it with them and the association will take action against them.

Besides, he said that their doors were open for negotiations; however, negotiations will only start after suspension of the AAC.

He said that they approached the Peshawar High Court seeking deduction of protesting employees’ salary as those receiving their pay from public money could not protest.

On the other hand, public is the victim of the ongoing strife between the bureaucracy and lawyers. On Monday, officers from all over the province were on strike while courts also could not work due to lawyers protest.

Litigants whose hearing were fixed for Monday and those who had work pending in government offices had to return to their homes empty handed due to strikes.

He said that nobody give a thought about the public. Both the bureaucracy and courts are for masses; however, no one talks about people rights.

“Even people are not aware of their rights,” he said.