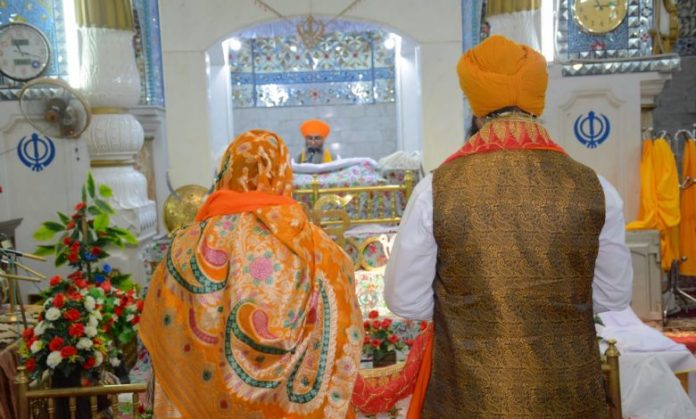 Sikhs population of Khyber Pakhtunkhwa is grappling with many issues due to their inability to register their weddings due to absence of legislation governing the community marriages.

The community members said that the absence of such legislation was causing great problems to them in case of dissolution of marriages.

Baba Jee Gurpal Singh, a Sikh community leader from Peshawar said that there existed no legal way for Sikhs to contract marriages in KP, which was causing them social and legal issues.

He demanded the KP government to enact a Sikh Marriages Act on the pattern of Punjab to resolve issues faced by his community. “Such legislation will help us in redressal of issues between the husband and wife,” he said.

The elder said that in absence of such legislation, females were facing multiple issues as the women neither can approach court nor there was any other legal recourse available to address their issues.

He said that at this moment, the Sikh couples have no legal evidence to establish their marriages. “In many instances police personnel harass couples while they go on honey moon after their marriages,” he said.

Besides, he said that the marriage rituals do not constitute a proof of marriage’ therefore, enactment of Sikh Marriages Act was urgent.

How Sikhs marry in the absence of legal cover?

However, he said that Sikh marriages lacked legal cover. He said marriages are solemnized on the Guru Garanth Sahib and later four witnesses sign a letter, which is later submitted with the National Database and Registration Authority (NADRA) to issue the couple identity cards.

However, Mr Tony said that in the absence of the marriages act, his community was worried about its social and cultural life. “After the enactment of the legislation, Sikhs couples will also get computerized and legal niakahnama,” he said.

Mr Tony said that there no word existed for divorce in Sikh religion and even divorces were rare. Besides, he said that in case of differences between spouses, the issue was addressed at family’s level. In case, the families fail to cool down the matter, then the matter goes to the gurduwara.

Punjab is the only province in the country, which enacted its own Sikh Anand Karaj Marriages Act 2018 under the PMLN rule. However, the Pakistan Tehrik Insaf government failed to draft rules under this act. Mr Tony said that they were demanding the new government to make rules for the implementation of the legislation.

On the other hand, Mr Tony said that the exact number of Sikh population of KP was not clear as they were not counted in the Census 2017.

However, he said that to address this, they petitioned the Peshawar High Court and the court has issued directions for counting of Sikhs in the next census.

Mr Tony said that currently there about 15,000 Sikhs living in KP.

On the other hand, figures of Sikh Resources and Study Center claim that Pakistan Sikh population stood at 50,000. Besides, 6146 Sikhs were registered with the NADRA.

Wazir Zada, Special Assistant to Chief Minister KP on Minority Affair said that government was ready to draft Sikh Marriages Act. He said that he had also discussed this with the Sikh community.

Mr Zada said that government asked the Sikh community to agree on the Punjab legislation and they will enforce it here as well.

Besides, he said that such legislation was very necessary to address matrimonial disputes between husband and wife.

Regarding the legislation, he said that once Sikh community agreed on it, they will share it the law department. Mr Zada said that after chief minister approval, the bill will go to the cabinet before being placed before the assembly.

He said that they will frame the rules through local government department after the approval of legislation from the assembly.