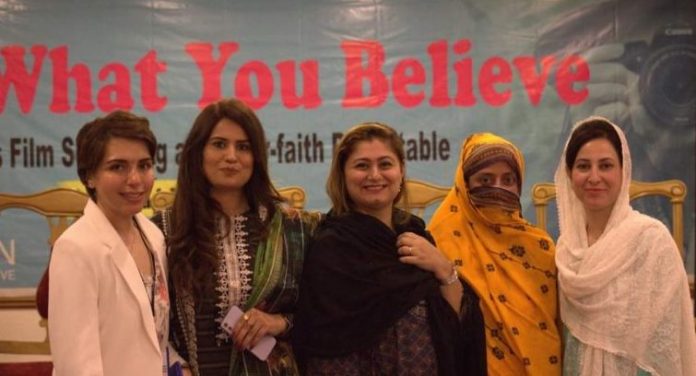 Women filmmakers from Khyber Pakhtunkhwa bagged the first and second positions in Women Empowerment and Religious Freedom Film Competition. Besides, two other women filmmakers also received awards in the competition.

Zeenat Bibi’s won the grand prize in the film making competition. Ms Zeenat who is working as a journalist for past many years has also founded an organisation the Gender Lens.

Tribal News Network (TNN) Ms Khalida Niaz who has been working with the organisation as a producer for the past few years, bagged the second prize while Eleni Spiru stood third. Jamaima Afridi from Khyber district was awarded the inclusion award for her film.

Ms Zeenat’s story She Stood Against Digital Extremisms tells the true story of a young woman in a war-torn region of Pakistan who starts an initiative to counter religious extremism and sectarian violence by holding dialogue sessions with youth from different beliefs and religions.

While Ms Niaz’s Peace Promoters is about a young woman in Peshawar, Pakistan counters religious-based violence by building relationships among different faith influencers.

The competition was arranged by the US organisation Empower Women Media. The media projects submitted to the film competition came from thirty women who took part in Empower Women Media’s Pakistan Media Training Fellowship. For six months, these talented Pakistani women learned about Freedom of Religion or Belief and received expert training on how to produce contextualized digital media to reach their communities and world class leaders.

In addition to this, Peshawar based journalist Fatima Nazish’s film Together We Grow and Together We Empower won the first position in Religious Freedom and Business Foundation competition. Samanta Javed from Rawalpindi stood second while Swat’s Shahzad Naveed won third position.

Ms Zeenat said about her film that all religions talk about peace; however, the extremism has increased despite all this talk.

She said that she based her film on this theme to show how a girl is promoting religious harmony. Besides, Ms Zeenat said she also included voices of other religions in her film.

“I want to dedicate my success to my husbands and parents as it is impossible me achieve without their backing and support,” she said.

Ms Zeenat said that in the past, her parents used to support her but now her spouse was also supporting her.

Ms Khalida Niaz said that her film tells the story of a girl who advocates for peace beyond the religious differences and talks to youth about their problems.

At least 200 boys and girls are registered with the Maria Akhtar and working for peace. This group tries to highlight the similarities among the religions.

The group members sit down together to eat to address misconception regarding different faiths.

Ms Niaz credited her parents for her success who supported her in difficult situation and at backing her in her journalism as well.

“We were amazed to witness the tenacity and creativity of the Pakistani women filmmakers,” said Shirin Taber, Director of Empower Women Media. “They took risks to share their women’s empowerment and religious freedom stories. Their films have the potential to change lives and shift the culture at large. We need more women media advocates like them!”

The films were screened in a function in Islamabad and the winners were given shields. The grand prize winner received US$ 3000 while runner up received US$ 1500 and third runner up US$ 500.

Ms Zeenat and Ms Niaz thanked the Empower Women Media and their instructor Nancy and said that her tireless efforts resulted into their winning entries.